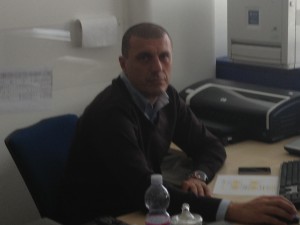 “Whether it is for the Superbike or Motomondiale World Championship, the shooting production vehicles may change but the work itself does not change. In fact we at Mediaset, on the occasion of the two-wheel motor races, are always there with mobile OB vans to make the necessary integrations and customizations,” says Andrea Cavalli, executive producer for the ‘engines area’ at Mediaset.

“The basic idea is to give our audience something more than the original programme which is implemented by the host broadcaster, in this case Dorna Sports.”

The additions provided by the Italian commercial broadcaster Mediaset for all MotoGP and Superbike championship events consist of inserting “proprietary” images in-between those made by the official host broadcaster.

This is carried out with two cameras working exclusively on behalf of Mediaset that operate with a radio-RF link, followed by two journalists who are moving in the box area to collect all the information that the international signal cannot afford to offer because it is already following the race. Everything happens live, including interviews.

Cavalli notes: “So often we talk about the work on the bikes, with interviews with the crew chief, rather than a chief mechanic who reveals why he made a particular setting.”

The two journalists are assigned the technical comments and their interaction takes place live at all hours, from the beginning to the end of the event, and also during the final in-depth analysis delivered in the show Fuori Giri.

“The search for the images therefore focuses on the details [such as] the change of tires, fill-ups, oil changes, [and] banter between driver and crew chief, with shorter interviews with drivers in the intervals between test rides,” says Cavalli.

The same cameras are also used for the pre-race on the grid behind the race itself. “We’re going to catch the final adjustments that were made to grasp the latest sensations, [and] we describe the faces of the drivers to see if they are stressed. In short, [we capture] everything that happens in the moments before the pre-ride and the race.”

All that the viewer sees aired on the circuit is created by an OB mobile unit that deals with the production, including signature tunes, the ‘luminose’ (advertising insert graphic overlays) and the infomercial since the broadcast from the circuit is required to be a finished product.

“So in addition to the integration of the two cameras, the mobile unit in turn deals with the contributions of all the above,” says Cavalli. “EVS systems are used to perform the replay, to pack the highlights, and more. In particular, in the Superbike, there [is also access to] feeds distributed by the host broadcaster made by some other cameras isolated on track and not committed to shoot the race itself. Often these cameras offer us typical images referred as ‘beauty’ shots that describe the environment and the situation.”

Also factored into the workflow are incoming images from a fixed camera located in the journalists’ commentary area, which features a revolving cast of characters.

Consequently, the integration features not only the two RF cameras but also replay and slowmo inserts, as well as the whole contribution of stings, tunes, ID logos and graphics, and the isolated cameras on the circuit. In practice, starting from the ‘basic’ product distributed by the host to all international broadcasters, Mediaset is able to enrich the feed with 4/5 other contributions.

The whole direction and control room on the circuit is connected to the operations centre – the central video management of Mediaset in Cologno Monzese, located on the outskirts of Milan – via a satellite uplink. Cavalli says: “Around 70% of the hours of programming airs on channel Italia 2 and 100% is broadcast in simulcast on Italia 1.”

Cologno also receives the video signal generated by the host broadcaster used as a backup, paired with the audio lines to journalistic comment, to be used in case of difficulty. Consequently, whatever the emergency, the signal can remain interruption-free, with audio commentary always available too.

On board the OB van, a graphic computer facilitates the necessary inserts, captions, graphics overlays, etc. The team makes use of Final Cut editing.