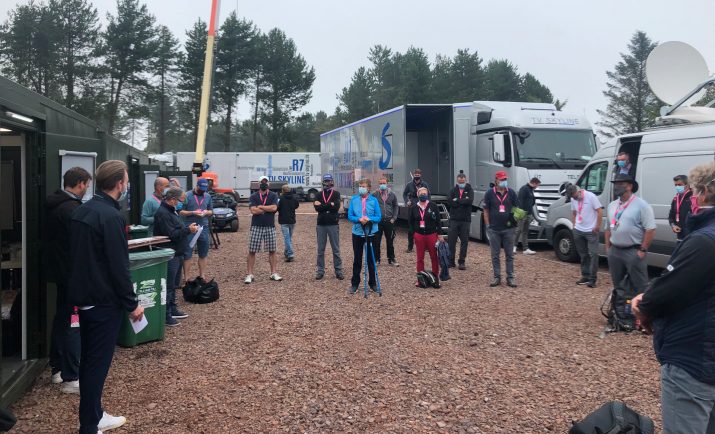 The LPGA Tour and Ladies European Tour have teed off this week at the Renaissance Club in North Berwick, as professional women’s golf returns to Scotland for the first time since Europe’s triumph in the 2019 Solheim Cup last September.

A team from Ladies European Tour TV production partner U.COM Media is onsite for the behind-closed-doors tournament, along with its OB services provider TV Skyline, producing world feed coverage for broadcast partners Sky Sports and the Golf Channel along with digital content for ladiesscottishopen.com. Sky Sports Golf and Sky Sports Mix coverage is from 12:00-16:00 BST and on the Golf Channel from 07:00-11:00 EST through the weekend.

The Aberdeen Standard Investments Ladies Scottish Open is dual-sanctioned by the LPGA Tour and LET and features Rolex Rankings No.2 Danielle Kiang along with No.8 Minjee Lee in the field this week.

In 2019, South Korea’s Mi Jung Hur came out on top to earn her first victory since 2014 and set the 72-hole tournament record at -20. While Hur is not defending this week, past champions Ariya Jutanugarn (2018) and Mi Hyang Lee (2017) have made the trip to The Renaissance Club, as have 2019 major champions Hannah Green (KPMG Women’s PGA Championship) and Hinako Shibuno (AIG Women’s Open).

The 144-player field also includes 15 of the top 20 in the Race to Costa del Sol competing for the $1.5 million purse, as well as Rose Ladies Series Order of Merit winner Charley Hull.

The Ladies Scottish Open goes ahead without spectators as a made for TV event following close consultation with the Scottish Government, Aberdeen Standard Investments, VisitScotland, the LPGA and the LET, adhering to internationally recognised COVID-19 protocols and subject to necessary formal approvals of athlete quarantine exemptions.

Fiona Hyslop, cabinet secretary for Economy, Fair Work and Culture, said: “The ability to host a tournament of the stature of the Aberdeen Standard Investments Ladies Scottish Open is great news for Scotland and is only possible thanks to the hard work of the many partners involved to develop the safety plans necessary to allow this fantastic event to take place.

“The Scottish Government is committed to equality in sport and society, and I am therefore particularly pleased that we are able to support the return of female professional golf to Scotland, building on the last year’s enormously successful Solheim Cup.

“I’m sure that audiences across the world will be enthralled by the stunning East Lothian coastline and views of one of the country’s top courses. I hope that will inspire many to visit when the time is right and offer a morale boost for Scots to see the return of international events to our shores.” 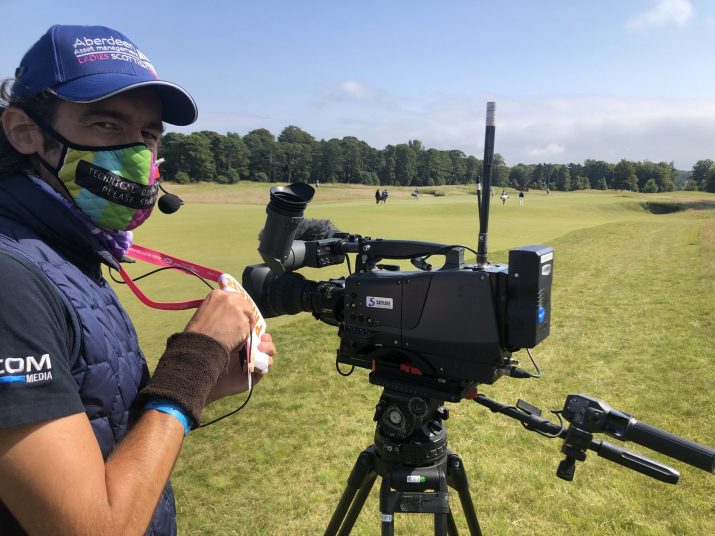 U.COM Media camera operator out on the course during play

U.COM Media head of business development Hendrik Finger spoke to SVG Europe about what it took, and what it takes, to plan and produce coverage of a Tour-level golf tournament with full social distancing in place due to COVID-19 restrictions.

“Since 2011 U.COM has been the production partner and rights holder for all Ladies European Tour events around the globe, and the Solheim Cup. We handle the rights and produce the pictures.

“We work with them where they are the main sanctioned partner and we also produce with them, or for them, on the events in Asia where they co-sanction with partners. Where we can we travel with the trucks from TV Skyline, and in other territories we work with local partners. We’ve now done work on all continents apart from South America.

“In terms of the camera coverage this week it’s pretty much our normal set up for four-hours-per-day live coverage: we have ten cabled cameras rotating on the course, four RF cameras and a beauty shot – plus an on-course commentator.

“We obviously had to do a lot of amendments in terms of workflow and workspace. One of the big differences is we need a lot more space in the TV compound, because everyone must work apart wearing masks. Everyone must have their own dedicated buggy to drive around the course and there are sanitising facilities everywhere.

“The biggest challenge was to implement the live workflow around camera rotation due to social distancing. We’ve allocated dedicated people in smaller groups, so they keep their distance and don’t mix. That’s our main priority,” said Finger.

TV Skyline’s OB 7 truck has three control rooms and features 32 workplaces on-board in an ‘old normal’ production configuration. Due to the three separate control rooms and the size of the audio area, the truck is ideal for use in socially distanced sports production given the current COVID-19 protocols.

“The big advantage with the fleet from TV Skyline is they have trucks with the [required] space, which we try to maximise. Also, some of the people that usually work in the truck have now been moved out into cabins, to maintain distance. For example the graphics guys who usually work in the submix part of the truck are now working from a cabin, in order to maintain more space in the truck.

“We have a lot of post production work spaces in the cabins: the highlights edit, social media edit and openers are being edited onsite. For all of that we have each team working in different cabins, and these people are together in the hotels so we try to group them as best we can and don’t mix them around. We have spread everyone out and do a lot through intercom, so that people don’t go back into the truck for example,” said Finger.

It’s a big challenge to bring in more cabins and place them in the compound for live production at a golf tournament?

“Yes but to be perfectly honest as soon as you get the tournament on the map and apply for all the permissions – obviously you have to provide all these concepts beforehand to the promoter, who has to obtain the special exemption from the Scottish Government – once you’ve put all that on paper you’re half way there as you’ve pretty much thought everything through. 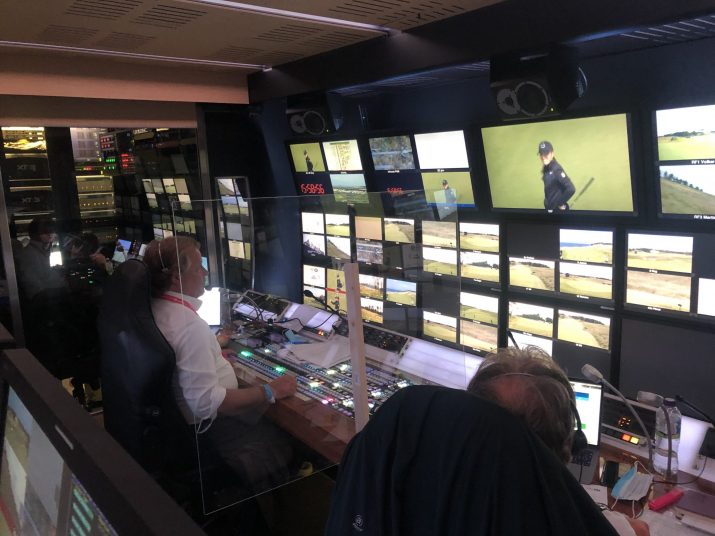 “Once the tournament is on the map it gets easier. But obviously it is a big change and people have to get used to it, especially the travel part and arriving and departure – there’s a lot more logistics around the work onsite.

“People have to leave immediately when the job is done and you cannot bundle them into big buses — so we have a lot more cars. The teams cannot mix in the hotel, and cannot eat out in the evenings. Everything around the work has changed dramatically; but onsite it’s all feasible and do-able.”

Tour golf TV production crews are used to being on the road together in close proximity: it’s a sociable environment.

“Absolutely. And getting access to officials and players and press conferences – that has all changed. The Tour has separated the different parts of the tournament. The players and caddies and officials are in one bubble; and everything around that is in a different bubble. But these bubbles are never really in touch. So when you have meetings and so on, they have to find ways to not mix these bubbles.”

On a big golf tournament you would normally have stars from the present and the past going into cabins for commentary and interviews, mingling with the broadcasters in the compound…

“Yes obviously at this time you can’t have guest commentators inside – not only players who have just finished their round or former winners, it’s also a big limitation for the sponsors. A major change is the ability for sponsors to interact with players. The biggest change is on this commercial side: not having VIPs, not having a Pro Am, and of course not having spectators.

“But we are thankful to the Government of Scotland and Aberdeen Standard Investments that they decided they wanted to stage this event anyway. They wanted to show the world they still supported women’s golf and made it a TV event.

“This could not be taken for granted: we’re not the Premier League or the Bundesliga, or the NFL or NBA. This is a good thing for the LET and for U.COM: TV is the only communication channel at the moment because they cannot have any spectators.

“I think for the promoter, staging an event becomes a bit simpler. With golf of course we have a big advantage as we have space and it’s not indoors. Logistically it does take some pressure away from the promoter, and also working on the ground becomes a bit simpler because normally at a big tournament you could wait a long time to get from A to B around the course due to the volume of spectators.”

Finally, for U.COM Media, can you now say it’s ‘business as usual’ again?

“I saw a lot of happy faces when our people moved back to the office to pack their stuff and prepare for travel. The people were waiting to get back on the road and the Ladies European Tour is one of our biggest clients.

“And obviously there was great uncertainty as to what would happen with the Tour, and when it would come back. It’s good to be back. The bett1ACES tennis tournament was our first one and for us in the company it’s a great sign that our work and expertise is needed again and we can do what we are here for. It’s big thing for us, after this long break.”