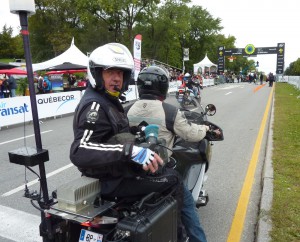 The UCI Road World Championships – taking place in Ponferrada, Spain from 21 to 28 September – are continuing to lead the way in terms of innovation for broadcast coverage of cycling. In 2014, after almost two years of R&D, the RF teams from Euro Media France are implementing a new technology, dubbed SMACS, for the first time.

Today (26 September) and tomorrow, a team of eight people from Euro Media France, led by Rudy Dendleux, will be hard at work equipping about 200 cyclists’ bicycles with a 35g sensor fitted under the riders’ seat. This sensor will be able to analyse geolocation data in real-time (namely position and speed readings).

“Cars and motorbikes close to the race are equipped with transmitters that send signals to each rider equipped with a sensor and they in turn send out information, which will on the whole function over a computer network with a RF Livetools (a Euro Media subsidiary) connection,” explains Bruno Gallais, who is in charge of RF projects for the French service provider.

As a result, Euro Media France can provide the UCI (Union Cycliste Internationale) with precise and immediate information concerning the exact position of each rider. The aim is to be able to locate each rider to the nearest second and thereby further enhance the television viewer’s experience with new information.

At the finish line, journalists will have iPads displaying the race route and the location of the riders in real-time. A second screen application should become available at a later time. EMF will be ready to commercialise this new technology from 1 January 2015.

In addition, for the first time in the history of the UCI Road World Championships, a certain number of bicycles and riders are being equipped with cameras enabling viewers to experience the race from the inside during the eight-day event.

Shimano, the bicycle parts manufacturer, will be providing the necessary equipment. Video clips (recorded live but not broadcast live) will be shown to the media, as well as the teams, athletes and national federations.

UCI president Brian Cookson stated: “The UCI is committed to delivering technology and innovation to all fans watching our sport. For the first time this year, we endorsed the arrival of cameras in the peloton and the ensuing results have delighted our fans. I am thrilled that we will be extending this innovative technology to the UCI Road World Championships for the first time. I am also very pleased that the UCI supports testing that will benefit cycling as a whole. The real-time geolocation of cyclists can add a lot of value to our fans’ sports viewing experience.”