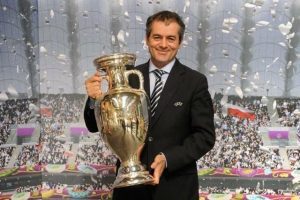 The Oxford Mail yesterday (Tuesday 19 December) reported a resolution to the long-running search to locate Bernard Ross. The former head of UEFA production – who has bipolar disorder – was reportedly found ‘safe’ in Switzerland this week, having been missing from his Oxford, UK, home since October.

Hopes had risen that Bernie – who is an SVG Europe Advisory Board member and a repeat-speaker at the Football Production Summit – would be recovered had risen in recent days after he showed up on CCTV footage captured near the organisation’s headquarters in Nyon, Switzerland, on December 8. According to his wife Jacinta Evans, Ross had asked security guards at the UEFA offices if he could leave five envelopes featuring a handwritten note saying ‘Aidez moi, please’ (‘Help me, please’). Police subsequently found a similar card at a nearby medical clinic, addressed to a doctor who had assessed his case in July.

Ross spent some six months in hospital during 2016 after his 11-year tenure with UEFA came to an end. It is believed that he did not have access to the medication that regulates his bipolar disorder, with which he was only diagnosed in middle age, during his two months as a missing person.

The ill-health and subsequent disappearance of Ross has caused profound distress to his family and to the sports production community, of which he has been a much-respected fixture. Darren Long, director of Sky Production Services, previously organised a fund to help meet Ross’ substantial medical bills, whillst Thames Valley Police in the UK continues to pursue his case.

Police in Switzerland have yet to issue any information about Ross’ current physical or mental heath. SVG Europe will post more updates as it receives them.