UEFA innovates at the Under-21 Championship in Italy with Global Production, VAR and 3D audio 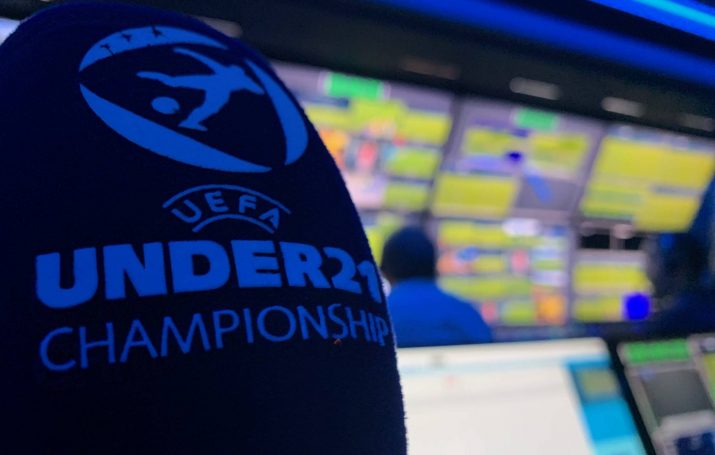 From 16 to 30 June, Italy was home to the UEFA European Under-21 Championship, played at stadiums in Bologna, Reggio Emilia, Cesena, San Marino, Trieste and Udine, where the final took place.

This major sporting event was produced by UEFA and the technical partner chosen for the production of all matches was the Italian OB provider Global Production, which recently joined the international Euro Media Group.

With 21 matches played over a two week period, the tournament coverage required a considerable production commitment that was entrusted to the four technical and editorial crews that took turns on the OB vans in the various stadiums.

Davide Furlan, chief executive and managing partner of Global Production observed that the definition of ‘technical partner’ is rather limiting because “we have been asked to take care of the whole editorial part and in fact we have provided all the directors, assistant directors, producers, floor managers, compound managers – all this army of over 200 dedicated people was managed by us.” 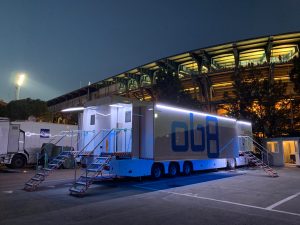 Global Productions’ OB8 truck outside the stadium in Bologna

The technical configuration included in the tournament qualifiers and in the final involved a camera plan of 14 cameras including two super slow-motion 3X, a hyper-motion 6X, two RF radio steadicams, five EVS stations, on-board OB van graphics and the VAR which for the first time was used by UEFA in a youth tournament.

The VAR set-up was provided directly by UEFA while the graphics from Global Production were based on the expertise of another Italian company.

There were four OB vans engaged, those that have just merged into the new corporate configuration that saw Global Production maintain its personal and professional profile in the new international landscape of Euro Media Group. Specifically, the vehicles used were OB6, OB7, OB8 plus a vehicle hired from Videe.

Furlan resumes: “It is important to underline that this is the first Global Production engagement in the new Euro Media Group corporate configuration, for an event of great commitment that moved about 200 people in total and for each game has seen around 50 professionals lined up.”

For each event, on board the vehicle was a director, assistant director, EVS master who coordinated the replays, five EVS operators, graphic designer, audio mixer, and the floor manager from UEFA who followed the entire production and applied the international running order with guaranteed editorial quality control.

“We are using 3D Audio recording as a demo for some broadcasters to promote future applications in Serie A football in Italy, obviously and ideally in conjunction with 4K HDR video.”

Obviously, for those matches where the Italian team was present there was higher media interest and so the mobile vehicles assigned were those with the greatest technical capabilities, namely OB8 and OB6.

The configuration of the cameras was standard and equivalent to Serie A football: it is known as Standard C for the preliminary stages and Standard B for the semi-finals and final.

The camera plan included the main cameras, 1 main and 2 close up-positioned on the 16 metres, then a 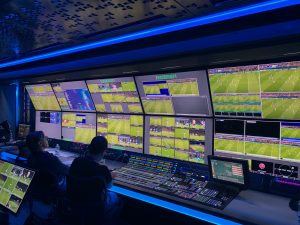 high back door, two low back doors, a Steadicam radio camera configuration with Link radio links by Links and Grass Valley moving along the left side of the field in the bench area, and a central, high reverse on the other side of the field.

For the 14-camera configuration, a second Steadicam was added, covering the right side and two other cameras in line with the area of the goals,but in reverse, beyond the goal itself.

The configuration was decided in tandem between the pool of Global directors and the UEFA manager. In each stadium there was a beauty camera, with a separate video signal demanded by UEFA, and a Polecam was also involved for the final.

UEFA had asked Global to take full control of the entire compound TV area and Global responded by providing a compound TV manager for each stadium. Three stadiums, where Serie A matches are normally played, are pre-wired while in the remaining three (San Marino, Cesena and Trieste) it was necessary to lay out temporary ad hoc wiring and this required the work of two dedicated teams of technicians for a fortnight.

The tight schedule forced the team at some stages to dismantle the set-up immediately after the end of an evening game and move at night to the next location to be able to set up again the next morning and be ready in the afternoon. 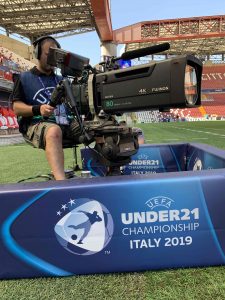 It was decided to produce audio in Dolby E, the audio coding system designed and optimised for the distribution of audio signals in professional environments. Surround and multichannel audio was routed via a conventional PCM channel, simplifying the wiring inside the production infrastructure.

The standard microphone configuration was provided by UEFA and configured with an additional implementation by Global sound engineers — in some respects — to have an even more present and engaging multi-channel Dolby.

Each camera showed stereo microphones that followed the shooting plans and then a multi-capsule microphone was placed in the main cameras area, responsible for capturing ambient sounds, the empathic reaction of the public, and to recreate the typical spatiality made possible by the Dolby system.

Moreover, very importantly, for the first time during a live sports production an immersive sound recording and processing system was used, otherwise known as 3D Audio.

This philosophy of shooting, which allows the sound to be positioned in three-dimensional space in a 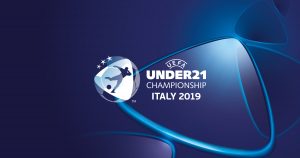 very precise way, even at different heights than the viewer, was used by Global Production on the 27th in the Bologna semi-final as a final test and the 3D Audio signal was recorded without going on air.

The result was so good that it was decided to also use the same system in the final at Udine, this time also for airing.

As many as 22 microphones were placed around the playing field, some positioned on the cameras and others on the sidelines, according to the canonical positions of shooting of international sound in a high-level football match configuration.

If the points of sound placement were traditional, there was an innovative management of these signals made with a German technical partner which provided special processors able to generate a live three-dimensional immersive audio.

In this scenario shooting takes place according to the typical techniques of surround and then a 3D digital codec can recreate a three-axis spatiality, never experienced before.

The system was created for musical use in concerts and multitrack recording for audio post production. Instead here it was used live for the first time

The system was created for musical use in concerts and above all in multitrack recording aimed at audio post production. Instead here it was used live for the first time.

The end user did not receive 3D Audio but a particularly accurate multichannel and stereo, derived from the immersive 3D Audio, with a much more defined presence and a very wide and open stereophony.

Davide Furlan said: “We are using 3D Audio recording as a demo for some broadcasters to promote future applications in Serie A football in Italy, obviously and ideally in conjunction with 4K HDR video.

“In headphones the yield is maximum, with the multichannel speakers of a surround system and also in the stereo. The experience of the spectator who feels himself in the field is exciting, and certainly superior to any audio program heard so far.”