UK Ryder Cup victory is a winner for Sky Sports, too 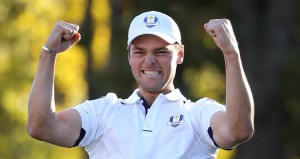 Martin Kaymer celebrates his winning putt at the 2012 Ryder Cup.

Sky Sports coverage of the Ryder Cup has been a mainstay for UK golf fans since 1995 (and in HD since 2006), and this past weekend’s coverage of arguably the most exciting Ryder Cup was once again a source of pride for the satellite provider. The weekend saw an HD production that — with the help of European Tour Productions, NBC Sports, and OB provider NEP — provided comprehensive coverage from the first tee to the last hole. Then there was a 3D production that, aided by CAMERON PACE Group and Dome Productions, celebrated a two-year anniversary for Sky Sports’ 3D channel by taking 3D golf coverage to the next level. And Sky News was on hand, making use of an eight-camera Sure Shot unit that also had satellite service.

“We’ve grown up and have become much more of a force in golf coverage,” says Darren Long, head of operations for Sky Sports. “And I think we are not seen as the satellite guys in the back corner of the compound. We’re now seen as someone who brings something to the sport.”

The commitment to Ryder Cup coverage, he adds, is fundamentally why golf is so important to Sky Sports.

“Everything builds to this event, and it is so important. We commit so much attention to it, with rich coverage with more talent, course commentators, and reporters,” he says. “We’ve moved away from the traditional box studio to now having talent that can really work off each other and use things like touchscreens to explain what is going on out there. If you look at the way our talent uses those tools, it is like they have been using them for years. It’s a great way to explain what is going on; it allows them to explain things in a visual way. We are, after all, visual animals.”

And emotional animals that, over the course of three days’ play, experienced all the painful lows and joyful highs of rooting for a team in the Ryder Cup.

When dawn broke over the Medinah Country Club on Sunday morning for the final round, the European team found itself trailing 10-6 and needing eight out of 12 possible points during the day’s 12 singles matches. The weather was crisp, cool, and dry. Ominously, dark clouds passed overhead about an hour before tee time. Then Rory McIlroy almost missed his tee time thanks to some time-zone confusion.

But, by day’s end, those clouds turned out to be an omen for the U.S. team, not Team Europe. The latter pulled off the improbable victory and retained the Ryder Cup with stunning shot making and sublime putting.

“Where in the world of sports do you have the USA against Europe?” says Long. “It’s magical, and you don’t get this energy anywhere else, especially when the crowds get behind their team and you hear the wall of sound when the players play up to the crowd.”

Viewers in the UK bought into the drama, which attracted a peak of 2.235 million viewers and averaged 1.276 million (with a 6.8% audience share between 4 p.m. and 1 a.m.). The Ryder Cup coverage was the most-watched programme on any channel outside the five main terrestrial networks and had a bigger average audience than any show.

The HD coverage was produced out of NEP’s Supershooter 18 OB unit, and both NBC Sports and the European Tour Productions provided upwards of 80 unique camera angles for the Sky Sports production team. But Sky Sports deployed an additional 20 Sony cameras around the course, including handheld RF cameras that allowed Sky course reporters to provide coverage from the course. Three studio cameras were also located at the main studio.

With NBC Sports playing the role of host broadcaster, one option available for Sky Sports would be to simply take the NBC coverage and add its own commentary. But golf events, and the Ryder Cup in particular, are far different from other sports because both U.S. and UK golf fans are predisposed to want coverage of players from their own country. Commercial breaks and different coverage philosophy also calls for more unilateral options.

“It’s really difficult to cut around whip pans and other things, so we really needed to supplement the production in a greater way than we were used to,” says Long. “We have to fill in those gaps. Otherwise, we will have terrible coverage, the audience will hate it, and that doesn’t do the sport any good. But we all need each other and work well with each other.”

Although the occasionally heated competition between the U.S. and European teams (and their fans) this past weekend might have one worried about the future of U.S./European relations, the energy in the production compound was a result of a cultural collaboration that helped everyone win out.

“We have a really terrific bunch of partners, and what I love about these events is, we can spend time with the people from NEP, Dome, and Sure Shot,” says Long. “So, from the top down, we are building relationships, and that is important as we are growing our knowledge of the U.S. and the marketplace. Sky Sports used to be the strange satellite company, but that has changed. People know us, and we bring something different that we hope can lift our partners to a new level and vice versa.”