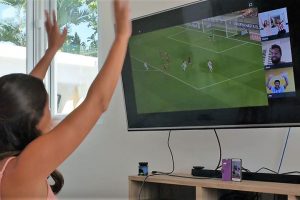 Developed by a London-based start-up called Sceenic, the Watch Together SAAS application makes it possible for friends and families to watch live TV and interact with each other even when they are not in the same room by making use of their mobile phone cameras.

The service will now be trialled by BT Sport for potential future commercial use and Sceenic will receive six months’ membership at TechHub with access to its workspace and events.

Sceenic chief executive Paul Bojarski said: “The idea [for Watch Together] came from me trying to watch sport over distance with my dad. We’re about togetherness, and BT has so much live content it will be amazing to test our technology with its users.”

Hamburg-based broadcaster NDR has reportedly already signed up to use Watch Together during its coverage of the Eurovision Song Contest.

BT Sport chief operating officer Jamie Hindhaugh added: “Sceenic reflects what BT Sport is all about – which is bringing our audiences into our content, driving engagement and being a broadcaster that speaks with our fans.”

Eight companies were short-listed for the 2018 BT Infinity Lab competition which is an annual global search for new sports media innovation. A panel of judges interviewed the finalists at the BT Sport studios in London on Tuesday 30 January before deciding on a winner.