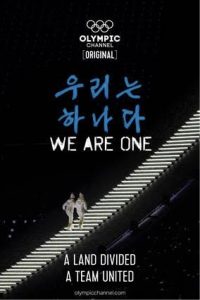 During the Opening Ceremony of the Olympic Winter Games PyeongChang 2018, North and South Korea marched together under the Korean Unification Flag for the first time since the Torino Games in 2006. This historic moment proved to be memorable for Koreans around the world and set the tone for further dialogue around peace and hope for the future of two countries.

The journey of the athletes, coaches, dignitaries and others who played a role in bringing the two Koreas together is now featured in a new Olympic Channel documentary entitled We Are One. An Olympic Channel original production, the 37-minute film premiered worldwide on Wednesday, 13 June 2018 on the Olympic Channel at olympicchannel.com and its mobile apps.

IOC president Thomas Bach said: “The joint march at the Opening Ceremony of the Olympic Winter Games PyeongChang 2018 showed the world the role that the Olympic Movement can play in opening the door to peace. Sport must continue to build bridges and show what it can do to bring people together.”

In January 2018, the International Olympic Committee (IOC) opened the door for the Democratic People’s Republic of Korea (DPRK) to compete in PyeongChang resulting in an athlete delegation of 22 athletes who competed in 3 sports and 5 disciplines. And for the first time in Olympic history, the IOC allowed two National Olympic Committees to compete on one team as 12 of the DPRK athletes joined the Republic of Korea (ROK) to form the Unified Korean women’s ice hockey team.

We Are One details the inclusion of DPRK alongside ROK at PyeongChang 2018 and their powerful show of unity during the Opening Ceremony. The film also follows the emotion-filled journey of the unified women’s ice hockey team from nervous introductions to their reception on the ice and tearful goodbyes.

“This past February, the world gathered together in PyeongChang for 17 days of peace, sport and culture,” said Mark Parkman, general manager of the IOC’s global Olympic Channel. “Many will remember the emotional reception that the Korean Unified Team received as they entered Olympic Stadium during the Opening Ceremony, and we are honoured to tell their story as they showed the world what can be accomplished when we work together.”

The Olympic Channel is a multi-platform, global media destination where fans can experience the power of sport and the excitement of the Olympic Games all year round, and is available worldwide via mobile apps for Android and iOS devices and at olympicchannel.com.