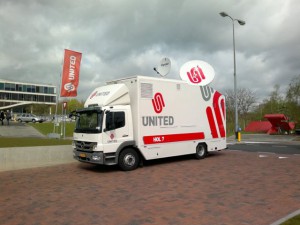 United's HOL7 is travelling from the Netherlands to Poland for Euro 12 coverage.

United is sending three satellite vans and one OB truck to Poland and Ukraine for NOS, Brazilian TV Globo International, and Infostrada Sports to record programmes on the European Championship. NOS chose to use United’s HOL-270 satellite car to monitor the Dutch teams’ progress. HOL-270 will be used as a four-camera car to record NOS’s evening programme, “Summer Studio/Studio Zomer.”

In addition, OB 8, equipped with seven cameras, will go to Kharkiv, where all of the Dutch group games will be played. The programme will be recorded by OB 8 and broadcast from the stadium. The match previews, downtime activities, and commentaries will also be recorded. These vans are all ready heading to Poland and, depending on the Dutch teams’ success, may not be back in the Netherlands until 2 July. If the Dutch team make it through their group rounds, United’s HOL-272 will also head to Poland.

TV Globo will use satellite van HOL-7 this year from 1 June until 1 July. This car will be equipped with two HD cameras, and TV Globo has chosen to hire a senior vision engineer, a senior sound engineer, and gripper from United OB as well. A Brazilian camera crew will be flown in to capture the tournament’s atmosphere.

Lastly, Infostrada Sports will produce an item for Voetbal International Oranje that will be broadcast daily using satellite car HOL-45.