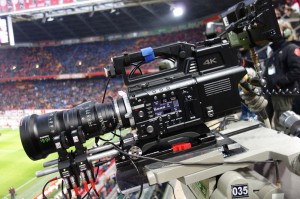 Bolke Burnaby, manager Operations & Events at United, said: “Last year our first major 4K production was at a Muse concert using 16 Sony F-55 cameras to fully cover the event from an OB unit. We chose the Sony F-55 because at this time the F-55 is the most flexible 4K camera for our requirements.

Burnaby continued: “The Fujinon Cabrio ZK-series are currently the only lenses that fill the gap between broadcast video lenses and cine film lenses. The operational handling is similar to ‘normal’ HD ENG lenses we currently use. PL mount lens models made by other manufacturers need to be dressed and fitted with separate lens motors: they are more expensive to operate and need more crew to handle them.

“It is very simple,” he said. “In film production there is ‘relatively’ enough time to shoot with ‘just’ one to three cameras operating – whereas we have 10 and 20 cameras shooting at the same time, and there are no re-takes! This means that we need a solid and fast solution.”

Sony key account manager Bas Roelfsema comments: “4K is the next step and has already been used in several recordings over the past few years in the Benelux. Sony is happy to show this new technology because there is a demand for higher quality for consumers and for the cinema screen – and also for new ways of broadcasting such as HD cut-outs. Sony Benelux can clearly see that there is a growing demand for 4K products in the broadcast area and is always willing to help if broadcasters have specific demands.”