In another busy summer of international football for the sports broadcasting industry, US Spanish-language broadcaster Univision Deportes has its innovative eye fixed firmly on the CONCACAF Gold Cup. 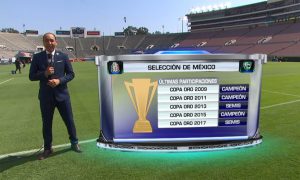 For the first time, Univision Deportes is deploying its augmented-reality technology at the stadium for coverage of this summer’s CONCACAF Gold Cup

Promising more coverage and a greater use of technology than it has ever used at this event, Univision will have an onsite presence at all of the tournament’s 31 matches, most notably taking its augmented reality graphics technology out of the studio and into the stadium for the very first time. The tournament kicked off last weekend and will run until 7 July at 17 venues in 16 cities across Costa Rica, Jamaica and the United States.

In recent years, Univision Deportes has attracted praise from around the business for the slick augmented-reality elements it has used in its studio environment. Now its engineers are upping their game by taking that technology from the comfortable confines of the studio to the wilds of the stadium environment.

According to Miguel Angel Garcia, SVP, live events, Univision Deportes, the months-long project involved working with Vizrt on the graphics package and Ncam on the real-time tracking technology to bring the AR magic to the pitch for pre-/post-match coverage and even with some in-game elements as well.

For the Univision ops team, the biggest challenge with the project is connectivity: ensuring that the technology can be deployed in an external environment and that all feeds can be transmitted quickly and with pristine quality. To assist, Univision is deploying an engineer dedicated to the AR graphics elements at each site where it is deployed.

“The connectivity is crucial to ensure that everything works as if we were in the studio,” said Garcia, who is overseeing his fourth Gold Cup for the network. “In the planning of utilising new graphics as well, we had to test out the template and make sure that everything is in sync. Univision has been producing REMI soccer matches for the past four years, and the biggest issue is always how are we bringing it back? At some of these venues, we have to request additional bandwidth. That was really our main concern.”

As for live match coverage, the in-house production arm of CONCACAF oversees the host feed being used by official rightsholders. However, Univision Deportes has taken advantage of an opportunity to add six of its own cameras to give the coverage its own stamp.

“CONCACAF does a tremendous job enhancing their production,” said Garcia. “What we want to do is stand out. We don’t want to just take the clean feed and add our graphics. We take the opportunity to add cameras to explain the story more to our viewers and stay up-to-date on technology.”

The extra effort is also one that Garcia and his team hold close to their hearts. Bringing live matches to fans not only of major sides like the US and Mexico but also of nations like Honduras and El Salvador is a service that Univision doesn’t take lightly.

“The Gold Cup, in many ways, is the most important tournament for our Hispanic audience,” said Garcia. “It becomes all-hands-on-deck for the whole company. We’re very excited for this Gold Cup. For many of these countries, this is the biggest stage. We want to give this event that importance.

“Some of these countries,” he continued, “are facing very difficult times back home: political issues that are affecting millions of people. When it comes to a game and the passion for the game that Hispanics are accustomed to, we want to bring them the anthems and the experience of watching the games.

“Soccer brings families together, and, hopefully, these games can help them forget about their issues for a little bit, and we can give them a great production as well.”