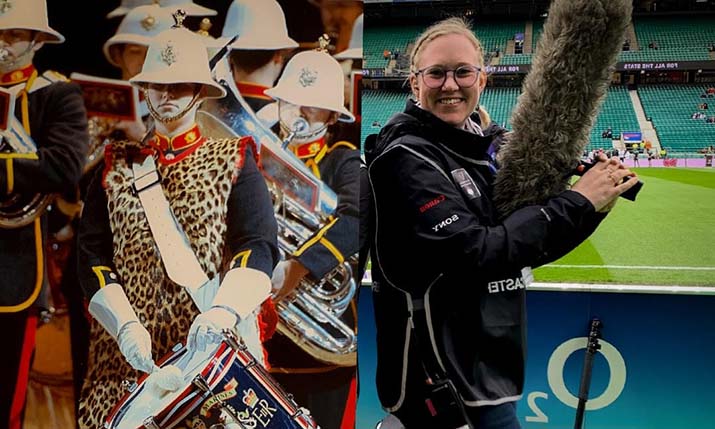 Sophie Lambert, OB sound engineer at Telegenic, pictured during her time in the Royal Marines and now doing her job in sports broadcasting audio

When faced with leaving the military back in 2015 having served six years in the Royal Marines Band Service, I was unsure what I wanted to do, says Sophie Lambert, OB sound engineer at Telegenic. Having taken part in many televised state occasions I had performed on the TV, but even then, I hadn’t considered how it was made.

I fell into my first broadcast role two years after I left the Royal Marines. I played in a blues band at the pub with some military veterans who worked at Arqiva, and it was through them that I was encouraged to apply for a job in satellite bookings.

“Aged 30 I was starting over again, but I had realised that having been in the military I already had many of the skills I would need for life on the road; I just needed to learn the technical elements”

Until that point I’d never considered all the effort that goes into getting TV to your screen. In my new role I loved the challenge of getting shows to air, but knew I that sitting behind a desk really wasn’t me.

I was made redundant when my department closed at Arqiva, and set my sights on becoming a sound engineer on OB’s; I chose sound because as a musician it seemed like the most logical fit. Aged 30 I was starting over again, but I had realised that having been in the military I already had many of the skills I would need for life on the road; I just needed to learn the technical elements.

I knew a few people who did this job so I badgered them to get me some work experience days. This resulted in me working every weekend for six months, during which I got myself out in different studios and car parks, learning how a broadcast is put together. Eventually I was offered a position as a sound assistant trainee with Telegenic.

“We could diversify our workforce in the next couple of years, not in a generation. So many people would be brilliant in broadcast, but they just don’t realise it is a viable career option. We have to go and find them if we truly want to make a change”

I had no sound or broadcast qualifications, but I did have a whole lot of life experience and skills learned from the military. From day one I was already used to working away from home, travelling, working with different teams of people all the time. I knew what it was like to find a way to get the job done, no matter what. I had worked under pressure on some of the biggest stages in the world, for some of the most important people.

“I could problem solve, I learned very quickly, I was always on time, and I had the desire to be really good at my job; qualities which almost every member of the Armed Forces have, and skills which are hugely transferable, but are often overlooked by both future employers and you as a service leaver. These are skills which take years to learn, and which I believe are essential to being a good OB engineer.

All I needed to learn on the job were the technical elements, how a broadcast fitted together, and how to execute my role, all of which I would argue are much easier to teach than most of the life skills needed.

In the year 2020 to 2021, 12,229* people left the UK military. These are highly skilled people from all walks of life, and although the diversity of the military population is still lacking, it is still better than ours in broadcast, with 11% of the UK military being women, and 9.2% identifying as being ‘non-white’ in their ethnicity.

There is scope here to diversify the broadcast space, and to diversify it more quickly than purely focusing on the younger generation and how we get them interested in science, technology, engineering and maths (STEM).

If 1,350 of the people leaving the military this year are women and those women are armed with so many of the skills needed to be successful working on OB’s, surely as an industry we should be searching them out and giving them the opportunity and training to be great engineers. We could diversify our workforce in the next couple of years, not in a generation. So many people would be brilliant in broadcast, but they just don’t realise it is a viable career option. We have to go and find them if we truly want to make a change.

The year before you leave the military you go through a period called ‘resettlement’, in which you are given access to lots of training opportunities in order to help you transition into the civilian world. You have time and money to spend on anything you believe will help you in your chosen next steps, and there are recruitment fairs for companies who see the value in military veterans. This period of time from military to civilian is where I believe us in broadcast have an opportunity.

Be proactive to find leavers

Advertising the industry to service leavers going through the resettlement period, inviting them in to see how we work, offering traineeships with clear career progression, and offering a competitive salary valuing the skills they are bringing to the table is what we need to do.

This is, for me, a clear way to plug the skill shortage, not to mention the opportunity to increase the diversity of our teams, opening up the world of making TV to people who already have so many of the skills needed to succeed out on the road. However, the broadcast community needs to search these people out because they will very rarely find you by chance.

There are a number of ways you can widen the recruitment net to bring in service leavers, including making tweaks to job profiles, encouraging those who have life skills and not necessarily the technical skills to apply, as well as advertising in places they will see you.

Armed to Forces Recruitment Fairs are a great way to get face to face contact, the British Forces Resettlement service is where you could advertise training opportunities and work experience, and Joining The Armed Forces Covenant is a public display of support for veterans, their skills and service and encourages service leavers to apply.

If you’d like to talk further about how you could help military leavers find broadcasting, what you can do to encourage them to apply or where to search them out, don’t hesitate to get in touch on LinkedIn @Sophie Lambert.