The USTA Billie Jean King National Tennis Centre in New York underwent an amazing renovation just in time to celebrate the 50th anniversary of the US Open in September. 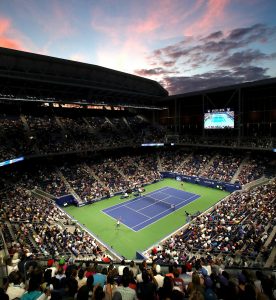 A new 14,000-seat covered Louis Armstrong Stadium, updated services across the campus and expanded food, beverage and retail options have all been part of a $600m (£470m) improvement project.

Van Wagner Sports and Entertainment (VWSE) produced the video screen content for the major stadium show courts and around the grounds at this Grand Slam event for the sixth consecutive year, using multiple control rooms and the shared resources of the in-house production crew and the broadcast networks.

VWSE has also been responsible for producing the scoreboards shown on the ‘ribbon’ (or ‘facia’) boards, and other non-standard LED screens located inside and outside the venue’s tennis stadiums.

The VWSE team had a wide range of sources available when producing the in-venue coverage, including cameras, replay servers and remote feeds. However, graphics are really the top layer of the screen presentation and what creates a big part of the branding for a video production.

This year, VWSE brought in Ross Video’s XPression real-time motion graphics engines to provide traditional insert graphics for the traditional match coverage, and also to drive the ribbon boards showing scores and open captioning in the main stadium venues as well as a number of displays around the grounds of the National Tennis Center.

“We have been wanting to bring XPression to the US Open for several years,” said Nate McCoart, producer and director of Technical Operations for VWSE.

“The flexibility to render graphics in real-time, as opposed to our content design team having to pre-build everything in the edit, allowed us to transform our workflow and deliver a better quality product to the client.”

“We’re not just programming for a 16×9 broadcast, we’re also focused on programming for the ribbon boards, fascia boards, vertical LED screens, the 80-foot wide super wall and anything else you can throw at us.”

In addition to XPression Studio, VWSE also used the Tessera SE option for four of the seven XPression engines to provide synchronised multi-channel playout control for feeding the facia boards inside the two main stadiums and a number of displays elsewhere around the grounds. Real-time data feeds from IBM and SMT surrounded fans at the National Tennis Center with scoring and statistical data that could be seen from multiple directions.

“XPression Tessera is a multi-engine synchronization tool that was designed for mega stadiums to fill the massive video boards which are populated with content and can require a high count of video outputs”, explained Patrick Twomey, director of XPression product marketing. “Tessera SE provides the same user interface and workflow of Tessera, but within a single engine. This meets the needs of more focused or smaller display requirements and is often enough for even substantial video productions.”

Outside the tennis stadiums, VWSE was also driving ribbon displays with information about the matches inside each stadium, and providing upcoming match schedules and court assignments for the players. Filtered content from Twitter and Instagram was prominently displayed on a 3840×1080 pixel ‘superwall’ spanning the width of the south entrance of the Arthur Ashe Stadium.

Content with hashtags related to the US Open helped get fans in the Tennis Center engaged and enticed social media users around the world to take part in the US Open on their computers and mobile devices.

“With the addition of XPression Tessera, we can take control of the entire venue and really make our show more cohesive across multiple screen destinations”, McCoart continues.

“We’re not just programming for a 16×9 broadcast, we’re also focused on programming for the ribbon boards, fascia boards, vertical LED screens, the 80-foot wide superwall and anything else you can throw at us.”