Vans Showdown gets some serious air(time) with Matrox Monarch EDGE 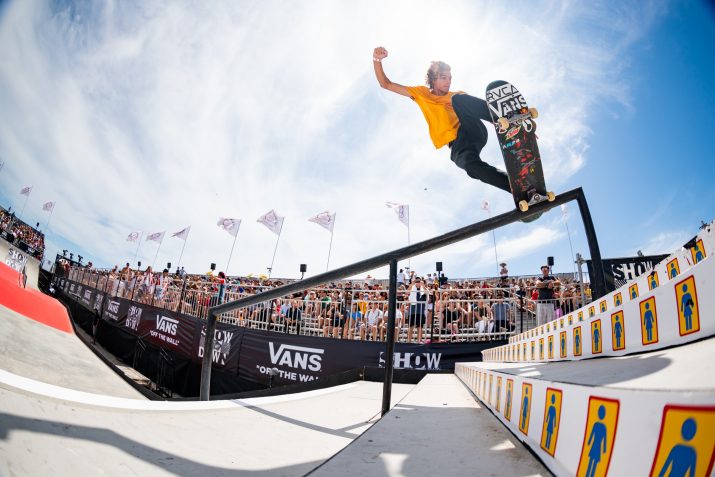 What do veteran skateboarders and their fans have in common? No limits. At the skate park, athletes push the boundaries of what is physically possible all the time, performing gravity-defying tricks and making them look easy. Skateboarding fans are the same. They don’t want to tune into a live webcast that is anything less than cutting-edge, giving them the look and feel of being at the skate park following their favourite athletes.

Thanks to the Matrox Monarch EDGE encoder’s ability to receive multiple HD feeds and composite them into a quad-split stream, and B Live’s innovative user interface that allows for clean switching between multiple camera views, fans of the Vans Showdown skateboarding competition got ‘star treatment’ just like their favourite skaters.

Part of the Vans US Open of Surfing held from 27 July 27 until 4 August in Huntington Beach, California, the Vans Showdown featured some of the best-of-the-best skaters competing at one of the biggest skateboarding events of the year. Meanwhile, during the competition, fans used their smart devices and desktops to head to the Vans US Open of Surfing’s official website and watch the B Live interactive user interface’s live streams of the action at the skate park.

In order to give fans a good viewing experience, New York City-based live event production company B Live needed an encoder that could accept four discrete SDI inputs and deliver a stream as a single quad-split composition. Before B Live purchased its Monarch EDGE encoder, its user interface did not allow viewers to watch multi-camera video with continuity.

Instead, the player would need to buffer each new camera angle selected by the user before the video would become available for viewing. “Before we got the Monarch EDGE, we were doing things ‘the old way,’” said Jay Kopelman, director of digital engineering for B Live. “That is to say, every time the viewer switches camera angles, it loads a new independent stream. Because we can now do quad-HD streams with Monarch EDGE, it has enabled us to feed a single 4K stream into the player. That is why it seamlessly switches on the B Live interface.”

During the competition, viewers could watch live feeds of their favourite skaters by visiting the Vans US Open of Surfing official website. The B Live user interface gave fans the chance to feel as if they were on their own decks alongside their favourite skaters at the Vans Showdown by allowing them to select from and switch between three different isolated camera angles of the athletes or the director’s cut – all thanks to the robust and dynamic H.264 encoding capabilities of Monarch EDGE.

B Live’s camera crew captured each competing skater separately. Four 1080p30 video streams, including three isolated views of skaters and one director’s cut produced on-site by a different team, were sent back to the B Live office. There, Monarch EDGE received the three isolated feeds and director’s cut, and encoded these feeds into a single 4K, 20-Mbps stream that was then sent to the B Live platform.

On the B Live user interface embedded in the Vans Open of Surfing official website, fans were able to easily decide which skater they wanted to view from the three isolated feeds available in addition to the director’s cut – all from their smart devices or desktops.

With Monarch EDGE’s ability to encode four 1080p30 video feeds together into one 4K stream has made B Live’s work of bringing best-in-class, live, multi-camera event footage to viewers around the world more feasible than ever. During the Vans Showdown, viewers of B Live’s interactive user interface enjoyed seamless switching between views of their favorite skaters without all the buffering required from outdated methods of displaying multi-camera content.

Kopelman said that B Live is also looking forward to leveraging Monarch EDGE’s upcoming closed captioning support capabilities in addition to continuing to use the device for live events with demanding quad-stream requirements. “One thing I haven’t seen on anything except Monarch EDGE is the 4:2:2 10-bit encoding. It is a hardened platform,” he said. “You know it’s going to keep working.”