VAR starts at the top for Copa do Brasil football matches

FIFA officially approved the use of VAR for the 2018 World Cup during the FIFA Council meeting in March 2018 in Bogotá, Colombia, and that tournament became the first competition to use VAR in full, at all matches and in all venues). The Campeonato Brasileiro Série A (Brazilian Championship A Series, commonly referred to as Brasileirão), Brazil’s top soccer league, approved it for use in August. (The English Premier League is trialling VAR at 15 matches this season.) 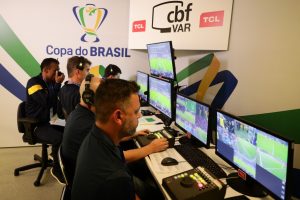 The VAR used for CBF matches will take video feeds from about 17 cameras deployed by Fox Sports and TV Globo. The VAR process will be applied to a specific set of issues: fouls, goals, red cards, and player-identification errors. A total of about 80 referees have trained for more than 400 hours, using hypothetical VAR calls, live simulations, archival replay video, and offline tests in six stadiums.

The video-assistant referees will be working from within each stadium, with their discussions with field officials and decisions rendered going through a Clear-Com communications system based on a Clear-Com Eclipse-HX Median frame. Attached to the Median are multiple V-Series panels that officials use to communicate to staff at the league’s respective stadiums. The frame is outfitted with several IVC-32-HX interface cards that allow the intercom audio signal to be carried over IP.

VAR refs will be able to question field officials in assessing contested calls on video replays. Stadium VAR refs will interact through Clear-Com CC-300 single-ear headsets attached to RS-701 Encore Partyline beltpacks, which provide connectivity between them as well as with the referees on the field. At each stadium, Clear-Com LQ-2W2 IP interface device brings in the signal and enables the connection to the two-wire SB-704 partyline main station. Multiple RS-701 beltpacks are attached to the SB-704 for the second video referee, video operator, and the replay operator. Additional beltpacks can be added if more staff are needed for the VAR system

According to João Pedro Homem, a principal at Savana Comunicações Brazil, which supplied 11 Clear-Com systems that will be used for 22 games each weekend this season, the VAR system is still undergoing refinement. Next year, the league intends to establish a central VAR post, most likely in Rio de Janeiro, which will work in concert with VAR officials in each stadium, a model similar to the NFL’s video-replay review process. Each review instance will also have its audio recorded. Broadcast audio will not be included in the review process.

Clear-Com intercom systems are widely used on Brazilian sports broadcasting, Homem says. “No other brand has the level of technical support or facilities that Clear-Com has in Brazil. Clear-Com did the system configurations and the operator training. That makes a huge difference when we’re introducing a new and critical element, like VAR, to the sport.”

VAR has been credited with significantly reducing controversy in cup matches. This year’s World Cup, where it was deployed, was the first in 32 years to feature no red cards in its opening four days, with video technology given the credit.