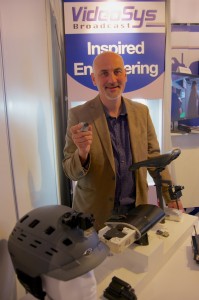 The smallest camera used on a production can often take the longest to set up, according to Colin Tomlin, managing director, VideoSys Broadcast, which has just entered the mini camera market. “We were approached earlier in the year by the facilities provider for Formula Renault World Series and they wanted an HD mini camera on-board system, and they also needed the mounting system redesigned as well,” said Tomlin.

“We took their original design. It had to stay the same size and shape, and it had to be no heavier, but they wanted to put the power amplifier for the RF system inside the mounting system, whereas before it was mounted elsewhere.”

The system was designed and machined in house, “and over the period of the series, we’ve been working with them to improve the system, and iron out the bugs. And over the year, we’ve been designing our own mini camera from scratch.”

The prototype housing for the new camera (shown at IBC) is a cube of about 2.5cm by 1.8cm, with all the software and PCB design done in house. As VideoSys has complete control over the design, it means it will be easy to adapt, “so if the end user says: ‘I don’t want to use an M12 lens, I want to use a C-mount lens,’ we’ll design another housing to take that. If the shape of the camera isn’t the right shape, we can redesign the board to fit into the housing that you want, so it becomes a bespoke product,” he said.

“That means that there is a price premium to pay, but you get exactly the product you want, including reverse camera control. A lot of the products that are out there have no reverse control — you can’t change the colour balance easily, unless it’s on an on-screen menu. This you can control live as if it was a normal camera.”

When VideoSys was founded six years ago, its initial product was remote camera control for broadcast cameras based on manufacturers’ RCPs but that aimed to replace cumbersome, basic user interfaces with a simplified, more robust control system that was easy to set up.

Design and manufacture for VeloView

Typically, when users wanted to integrate miniature cameras into their broadcast systems, getting power and control to it and its video back to the OB usually required a lot of other equipment, such as fibre converters and power supplies — making the mini camera not so mini.

By pairing its 50/60i HD 1/3-inch CMOS camera with the Cobham Nano, via HD SDI, and making it fully controllable from any industry-standard RCPs. Because it has designed its own circuitry, it means it can create camera of whatever size and shape are needed.

For example, for Broadcast RF, it designed and manufactured the VeloView camera system for on-board use in indoor cycling events. This housed the HD camera, Nano transmitter and battery in a single housing weighing less than 200g (the Nano in its original housing weighs 140g). It has also created a housing that fixed a camera and Nano onto a fencing helmet for AMP Visual.

For the Formula Renault World Series it designed a wing, based on Renault’s old wooden design, with both rear and front facing cameras, with a rotating cleaning film and camera switching, using Cobham’s RF technology. It is now developing another mini camera, with remote tilt, for another motorsport event, and the smaller prototype it showed at IBC should be available before Christmas.

Not just the RCP, but also the MSU

As a distributor for Cobham, VideoSys also designs and manufactures products to augment the radio link, including the camera control and fibre antenna systems. However, until recently its camera control has only worked in unidirectional mode, which means users only have about 90% of the user functions available on a standard remote control panel.

Of course, Tomlin admits, “most of the systems running for the last ten years have been bi-directional,” but VideoSys has tried to make them easier to set up, “because in the past they’ve been a little bit cumbersome,” he adds.

Its receiver, on the camera, will automatically detect which mode it’s supposed to be working in, and sets itself up accordingly. “Also, at the truck end, everything is integrated into the Sony network system, so that all the panels, including the MSU, are connected to our box via IP. Inside the TV truck, or inside the studio, our box appears on the Sony network as if it were just four Sony CCUs, so it is easy for the customer to integrate the radio camera control into their system. Using the bi-directional control they have 100% of all the functions available — not just the RCP, but also the MSU, so you get all of the engineering functions as well,” he said.