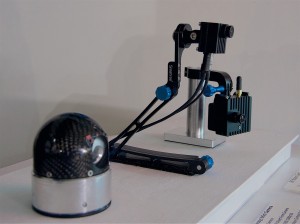 Some of the VideoSys’s miniature cameras, including the new 360º panning camera for motor sport (left)

VideoSys Broadcast is one of those small companies that excels in building custom equipment for sports production, particularly miniature camera and transmission systems, most of which are initially built to order for broadcasters with a specific need to fill. “I want people to ring us with problems. Everyone wants it smaller and lighter, and we can achieve that,” claimed Alistair Horne, sales manager, VideoSys Broadcast.

Other than the 2/3-inch sensor, all of its latest miniature camera was designed in house, which means it can be more flexible in how it implements the system in any custom configurations. Its new cricket camera, which was on show at IBC, was built because a customer asked for it. “We’re all about making it easier for the end user, because we were all end users in the field,” added Horne, who often works on sports OBs.

The tiny camera system can work with different lens mounts. Although the usual choice for that size 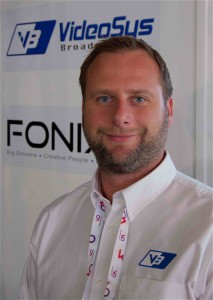 of camera is a C mount, the cricket camera is M12 mount (including iris support). It can also work with any broadcast remote control panel (Sony, Grass Valley, Ikegami, Hitachi or Panasonic), or can be used with the VideoSys camera control system, which can control up to four cameras on a single system and has been built into the new Domo OBTX transmitter.

The new RF NanoCam is a version of the same camera mounted on to a transmission board, with battery power at the back, so that “it is smaller and lighter”. It uses Domo’s Nano Solo7 100mW COFDM transmitter technology (VideoSys is the UK and Netherlands reseller for Domo Tactical Communications), and the complete unit weighs just 174g.

This produces the lightest possible weight for a transmitter/camera system,” and is suitable for any applications that require a lightweight system, “where the camera can’t be separated from the transmitter, like an on-board motorbike camera,” said Horne.

VideoSys has also built a small 360º panning on-board camera for motor racing that sits on top of the car. It will be used for a major motor race in Europe next year.

Other applications it has designed systems for using the miniature camera include: on-board cycling; fencing helmet camera; ref camera; and in-goal camera.

For a parachute jump at a recent air display, VideoSys built a system using a tiny new 1W COFDM power amplifier from Domo, to send back pictures from 12,000 feet (3,658 metres). It used a bracket for the transmitter and amp on the jumper’s ankles (where they wouldn’t get in the way of any safety-critical equipment), cabled to a VideoSys camera on the helmet.