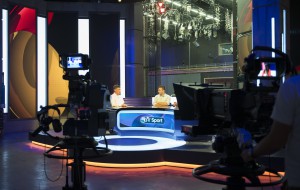 The technical specification in the BT Sport complex in London features an extensive contingent of equipment from Vinten, including camera supports – which the studio uses to support all of the broadcaster’s live programming – alongside four Vector 750 and eight Vision 250 heads on a mix of Osprey, Quartz and Quattro pedestals, with an encoder for Augmented reality capability. Three E.P.I.C integrated prompters and monitors from Autoscript were selected to work alongside the Vinten supports.

Jamie Hindhaugh, chief operating officer at BT Sport, comments: “It is a lot of live television and we need products from brands like Autoscript and Vinten to enable us to deliver the multiple programming from the three studios. These products play an important part in in our cutting-edge production hub.”

Prior to the launch of BT Sport in August, the company worked behind the scenes to ensure everything would be up and running in time for the launch date ahead of the start of the Barclays Premier League. The studio was built and fitted out in just five months, project managed by Timeline Television, which worked in conjunction with its regular supplier Megahertz Broadcast Systems.

Hindhaugh remarks: “Launching three channels simultaneously from a purpose built production facility that was created from scratch in 21 weeks is nothing short of astounding. In that time, we managed to construct the entire studio complex and integrate a complete end to end workflow – a stunning achievement which, in retrospect, defies reality.”

The project managers, Timeline Television, oversaw the full installation of the studio and helped BT Sport to design everything, from the workflows right through to selecting the most suitable products. Timeline Television drew on its existing relationships with Vitec Videocom partner Megahertz to achieve the tight lead-in times that would allow BT Sport to fit out the facility in such as short space of time.

One of the major differences between the BT Sport studio and more traditional studios is its shape, which is L-shaped. The studio is resin-finished, with concrete on one side, whilst the other side is a 20sqm glass pitch that is LED underlit.

“It can become a football pitch, a rugby pitch or a tennis pitch at the press of a button. We’re trying to move away from stats and touchscreens, and with this studio we can do live interactive coverage on the pitch. For football coverage, it has a full size goal with a six yard box and penalty area, and for rugby games we have access to virtual life-sized posts. This set-up is really physical and allows the pundits to demonstrate moves live on air, many of our presenters have a sporting background and we find this tactile approach really allows their personalities to shine through,” concludes Hindhaugh.