All Supercars Championship drivers are participating in the eSports effort

When the Virgin Australia Supercars Championship shut down in March due to the coronavirus pandemic, the Australian motor-racing series joined the growing list of circuits that have gone the eSports route.

In an effort to keep fans engaged, the circuit launched the BP Supercars All Stars Eseries, with Supercars drivers competing from their homes via the iRacing computer simulation platform. The Eseries, which began on April 8 and comprises 10 rounds, is being produced in conjunction with Supercars’ OB technology partner Gravity Media.

“The coverage philosophy is the same as a normal race coverage. However, instead of directing cameras, you direct observers on computers to cover what you need,” said Nathan Prendergast, GM, television and content, Supercars Media.

“We still have our philosophies of how we want the coverage to look and how we integrate the in-car [cameras], but we do more work in the leadup, developing the right angles and working with other partners with camera overlays to make sure that the race coverage is representative to what we would want to deliver in the real world.” 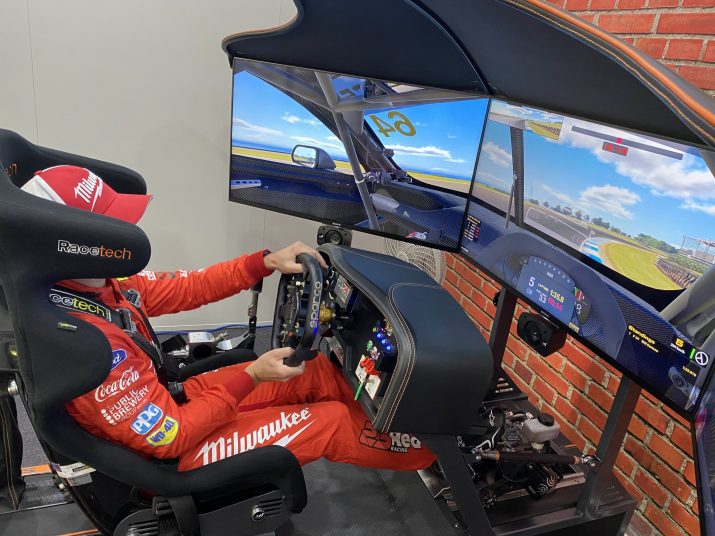 The BP Supercars All Stars Eseries, which is broadcast across a two-hour weekly window on Wednesday nights at 7pm Sydney time, is broadcast on Fox Sports, Kayo, TEN Play, and Sky Sports New Zealand and is streamed on Supercars’ Facebook and Twitch channels. Other streams that Gravity Media is feeding include Fox Asia, motorsport.com, and Red Bull TV in territories as far away as Eastern Europe, Scandinavia, and Africa.

With that in mind, Prendergast and his team made an effort to make the Eseries look and feel like a true Supercars broadcast. To do that, Supercars Media secured its primary TV-broadcast talent team, including lead commentator Neil Crompton, and also integrated the Supercars GFX package with its partner Girraphic.

“It was important from the very beginning for this product to feel like a Supercars broadcast and not an interim gaming product,” he said. “Having our regular Fox Sports host and free-to-air–partner host from network Ten all added to a familiar look, feel, and sound to a traditional Supercars coverage.”

All 25 Virgin Australia Supercars Championship drivers agreed to take part in the Eseries, along with several guest drivers from other circuits around the world. All 25 driver webcams around Australia are available via Zoom conference, and two scan-converted outputs with driver audio are available on Discord channels.

“The next important thing was to humanise the coverage by showing as many ‘real’ people as possible during competition,” said Prendergast. “Utilising the webcams from each driver and placing them in boxes whilst they race not only shows the effort behind the competition but reminds the viewer that a real person is behind the outcome of the competition. I feel it’s one of the key things of our coverage.”

Gravity Media integrates up to 30 drivers from all over the world (via consumer-grade internet speeds), commentators in Melbourne, and Supercars’ driving-standards observers on the Gold Coast, as well as the control room and studio elements at The Production Centre in Sydney for the action to be streamed live across multiple platforms.

“We have been fortunate that Gravity Media has the tech and facilities to be able to connect our different talent and officials in this isolated, locked-down world,” said Prendergast. “Gravity Media allows us the bandwidth to connect all these people and then output it to the world both as a traditional TV feed and encoded RTMP stream. It’s a very powerful environment.”

Additional commentary, including camera and on-air audio, is hosted from the Melbourne Production Centre, with broadcast facilities connected into the facility in Sydney. A return feed and separate talkback circuits are delivered from Sydney to Melbourne for commentators. The Driving Standards Advisor is hosted from the Gold Coast with camera, on-air audio, and a separate communications link integrated at in Sydney.

Gravity Media’s Production Centre in Sydney and other sites practice the appropriate COVID-19–safe work precautions with hand sanitiser and glove stations, temperature testing, and safe-distancing in all workspaces, including control rooms and studios.

“Gravity Media has been vital in ensuring this series could come together in a very short period of time,” said Prendergast. “The ability to access a connected facility, along with the smarts and personnel to assist us in connecting the traditional TV assets like the host studio, the gaming and PC world and the connectivity between drivers and interstate hosts – all from one venue – has been invaluable. This project was about three months of work in three weeks.”