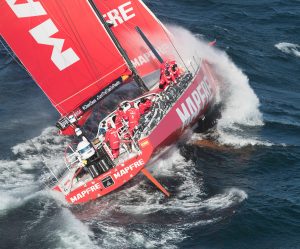 xG Technology has announced that its Vislink business has supplied a suite of wireless video transmission equipment as Official Radio Frequency Broadcast Equipment Supplier to the Volvo Ocean Race event.

Vislink wireless broadcast video equipment was selected to ensure that high-quality footage of racing yachts taken from cameras on chase boats and helicopters would be transmitted without degradation back to shore live, as it happened, for viewing on giant video walls at the Race Village as well as on international TV broadcasts.

Vislink’s extensive experience in transmitting video across large distances, in all weather, and in challenging conditions during racing, sports and broadcast events was critical.

“As the world’s leading provider of end-to-end live video communications solutions, we are proud to have partnered with the Volvo Ocean Race as an Official Supplier,” said David Robins, global sales director for IMT Vislink. “This prestigious event is considered one of the most extreme sporting venues in the world. It was an outstanding opportunity to showcase our expertise in live broadcast technology and in delivering exceptional performance and reliability, even in the most demanding and unpredictable environments.”

Round-the-world yacht racing is one of the most grueling sporting challenges, and the Volvo Ocean Race is considered the ultimate one of its kind—circumnavigating the globe over a course covering 45,000 nautical miles, facing waves of over 40m and extremes temperature ranges from -5 to 40°C. During the event, teams on 22m-length yachts crossed four oceans over 9 months, competing in 11 legs between a dozen host city ports, and finishing up in The Hague, Netherlands.