Vizrt, a provider of sports analysis visual storytelling, brings a new tool to the broadcast studio with Viz Libero AR. Just in time for the World Cup, Viz Libero AR combines the analysis power of Viz Libero with augmented reality (AR) graphics, creating a new way for sports presenters to tell the story of the action on the field and engage sports fans. 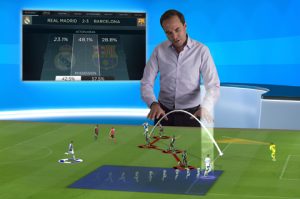 “Viz Libero AR brings the pitch into the studio, giving the fans the experience of analysing the most important plays with the experts,” said Remo Ziegler, Vizrt’s VP Product Management Sports. “The seamless transition between Viz Libero AR and Viz Libero analysis clips lets the viewers sit in the first row at all times, be it in the studio or on the pitch.”

Viz Libero combines realistic 3D replays and virtual graphics from any sport to provide deeper, multi-angle analysis of key plays and moments within the game. A photorealistic 3D view based on the original game footage enriched with analysis graphics are placed as AR elements in front of the sports presenter in the studio. Studio cameras control the angle of the field tying together the studio and the analysis. The sports presenter can interactively control the action using an iPad or touchscreen.

Ziegler added: “Vizrt’s focus is to expand broadcasters’ sports storytelling capabilities with tools that inform and engage audiences. Viz Libero AR adds a new ‘wow’ effect that viewers will remember from the Football World Cup or any other sports event beyond.”

At NAB 2018, Vizrt will also showcase other sports innovations for the World Cup. This includes visualising player tracking, interactive graphics and augmented reality tools for the studio. Teams and coaching staff will be able to see the latest version of Viz Libero designed to help them break down key plays of the game. For American Football, Viz Arena’s Down and Distance package has been enhanced with new features for the 2018 season. Vizrt will also show the world’s most advanced optical ad replacement system, Viz Eclipse.