Vizrt, deltatre collaborate on graphics package ahead of Rio 2016 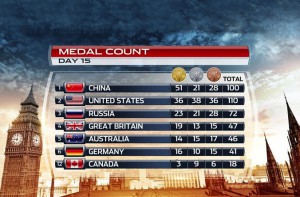 Vizrt has announced that it is working with deltatre to deliver an end-to-end solution for producing rich data-integrated broadcast graphics. The new package is designed for broadcasters carrying live sporting action from Rio 2016 and will be available for them to rent through dedicated Games rate cards.

The new package – which will be on show on Vizrt’s booth (SL2417) at NAB 2015 – is both hardware and software-based, and incorporates competition and athlete data from the Olympic Data Feed (ODF). This data includes information on individual athletes and competitions such as results, medal tables and world records. The official XML-based feed, delivered live during the games by Olympic Broadcasting Services (OBS), is fed into deltatre’s Magma platform. This software instantly converts the live sports data into customisable broadcast-ready graphics. The graphics are then rendered by Viz Engine and ready for playout.

Dr. Stephan Würmlin Stadler, executive vice president of Sports for Vizrt, said: “With an event the size of Rio 2016, there’s so much going on at the same time that the narrative is constantly changing. Using the ODF ensures that a broadcaster carries the latest official data. Being able to present it in a creative way helps to keep viewers engaged across what can be a very congested schedule of live televised sport. This end-to-end package delivers a powerful and accessible graphics solution for broadcasters’ biggest event of the year.”

Carlo De Marchis, chief product officer at deltatre, added: “This package complements the rich digital offering we have put in place for Rio 2016 and shows off the best of deltatre and Vizrt. Our Magma platform simplifies and enhances the storytelling of each sport during the games. By using Viz Engine for rendering and leveraging deltatre’s multisports experience by using the ODF, we can help broadcasters covering the games to bring the constantly changing information to life and provide a new customisable tool for their in-depth analysis in a very cost-effective way.”