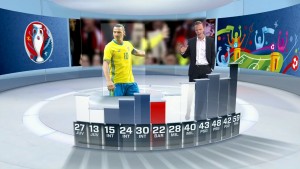 When TV 2, the largest commercial television station in Norway, decided to upgrade its set to cover the current European football championship, it had one major problem to confront: space. The area they were working with was only 5.9 sqm with a small 3.4 sqm walking blue screen area – a space that was far too small to build a new hard set with any type of dimension and creativity.

The network called on Dot Connector, based in Taiwan, to design a virtual set that would look captivating on air while also providing the flexibility to accommodate the various shows on the TV 2 schedule. Having faced similar challenges with other clients, the team at Dot Connector envisioned a virtual set with real-time 3D graphics and lots of automation capability using technology from Vizrt.

“We began this project by asking ourselves, how can we create a beautiful set with a lot of functionality in this small physical space?” said Kenneth Tsai, Dot Connector CEO. “Our company had done similar things before, but TV 2’s existing studio was a real challenge we were ready to face.”

Specifically, he chose Vizrt’s Viz Virtual Studio software controlled by a Viz Mosart automation system. Viz Mosart allows a single operator to handle complex productions that would normally require a team of operators. This allows staff to concentrate on other tasks, improving overall efficiency. The workflow leverages TV 2’s existing newsroom system and the Viz Pilot template-based graphics plugin to create the rundown and push from Viz Mosart automation system to control the set. This allows programme directors to pre-programme their rundown before the show airs.

“It is always a fun experience to work with Dot connector,” said TV 2’s Eivind Netland, head of design for news and sports. “Kenneth Tsai and his team worked closely with our internal staff to deliver a stunning 2016 European Football Tournament virtual set. The new sports set has very dynamic functionalities and great templated capabilities to fit into our Viz Mosart workflow. They made the virtual set not just a virtual set, but an instrument that our producer could use to perform the show.”

The new sports set includes 23 different graphic looks in one user-friendly template (created with Viz Artist software), plus two magic glass windows on set that can transition to six different locations within the small space. TV 2’s directors now use those displays to add creative shot blocking to their shows that they could never perform before.

“Vizrt’s technology provides a very efficient way to use dynamic texture to create clean and amazing-looking virtual set designs,” Tsai added. “With Viz Artist even the smallest stage area can be turned into an impressive studio. That’s what we did here.”

To further enhance its look and capabilities, the new studio is now equipped with an advanced robotic camera system from a TV 2 subsidiary company called Electric Friends. There’s also a social media component as TV 2 likes to incorporate live Facebook messages and tweets into the live broadcast.