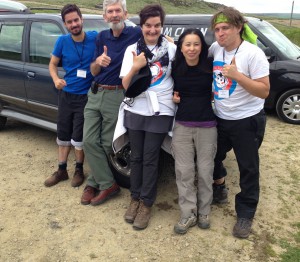 As reported here last week, a group of colleagues from content production and distribution tool specialist Vizrt this year elected to undertake the Trek50 event, which challenges teams of four to trek 50 miles in under 24 hours around the Pennines on the Lancashire and Yorkshire Borders. SVG Europe is now delighted to report that the team completed the epic walk in 23 hours and 20 minutes, raising nearly £1600 for children’s health charity MedEquip4Kids in the process.

Recalling some of the dramatic moments of the hike, Trajkovska observes that “the area is very hilly and after midnight we were exhausted. It was dark and as soon as you stopped walking it was cold. On top of that we got lost in a boggy area and were trying to find our way for almost half an hour. We came across another team who were also lost and tired and wanted to go in a different direction. At this point we were very slow. Then our map reader, Hue, saw the train and another team heading in the right direction. I shouted to the other team that was lost and then we all started running along the trail. Andre was ahead of me, going really fast, and I remember thing ‘I am running now and yet I could barely walk five minutes ago!’

“I am not sure where we got the energy from, but we were going really fast for the next hour; we were just so happy to be going the right way. It was 1:30am and we knew we had 4-5 hours more to go, but it was at that point that I knew we would make it!”

Make it they did – but as Trajkovska points out, the team is still a little way short of its target fund of £2,000. Donations are still being accepted at https://www.justgiving.com/Vizrt/, with all money raised going to MedEquip4Kids, which provides equipment not available on the NHS in hospitals in the north of England for the treatment of children and babies.

Understandably delighted by the completion of the challenge, Trajkovska also believes that it has underlined the inherent strengths of the Vizrt UK team. “A challenge like this is a microcosm of everything that is good about being with a great team – just like the challenges in our workflow when we work on demanding projects with high-end customers who use Vizrt. It is reassuring to know that your colleagues are around you just when you need them,” she concludes.