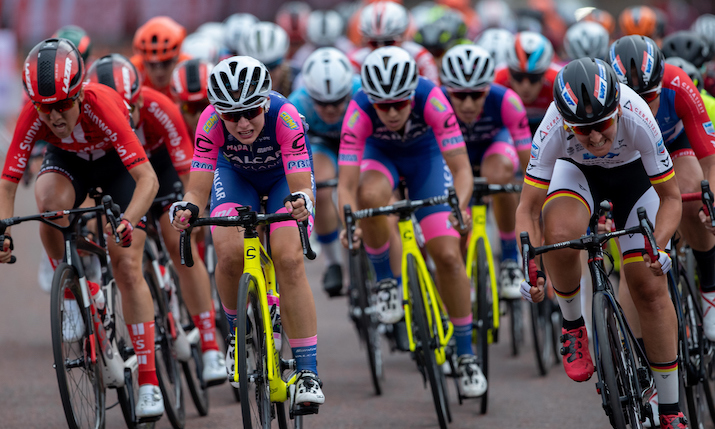 Whisper has been appointed host broadcaster for the 2022 RideLondon Classique, the three-day UCI Women’s WorldTour road race, taking place from 27-29 May on courses in London and Essex.

Featuring the world’s greatest teams and riders, the Classique has been part of RideLondon since its first edition in 2013 and was added to the UCI Women’s WorldTour calendar in 2016. After being suspended due to the pandemic in 2020 and 2021, the Classique returns with gusto in 2022, and is set to be bigger and better than ever before.

As host broadcaster, Whisper will deliver highlights of Stages 1 and 2 to the BBC and RideLondon’s worldwide broadcast partners. Then, on Sunday, Whisper will provide live coverage of the final stage, which will air on BBC Two at 15:30, as well as providing the feed to other international rights-holders. The final stage will feature many of London’s iconic sights, including Trafalgar Square and the City of London.

Whisper’s production team features programme editor Stuart Hutchison, who has directed both RideLondon and Tour of Britain, supported by Anne Somerset. Whisper will draw on its host broadcast experience, having worked for a number of other complex live women’s sport events such as The Women’s FA Cup, Women’s Super League and W Series.

Whisper will also be providing digital support for RideLondon, generating clips of the live race action for social channels, to maximise storytelling opportunities.

Developed by the Mayor of London and his agencies in 2013, Ride London is a festival of cycling and features four mass-participation rides in addition to the Classique.

For those seeking a challenge, there is the RideLondon-Essex 100, 60 and 30-mile rides, while FreeCycle enables people of all ages to explore London on a bike by taking part in a free ride held on eight miles of traffic-free roads.

Seeking to appeal to as wide an audience as possible – both cycling specialists and more mainstream viewers ­– Whisper’s coverage will feature Sunday’s RideLondon-Essex 100, 60 and 30 plus FreeCycle in among the racing action of the Classique.

Mark Cole, Whisper MD, commented: “The RideLondon Classique is a fantastic event which demonstrates what sport is all about: inclusivity, opportunity and encouragement, with the incredible chance to see the best in the world going head-to-head. The event is a great celebration and we are really excited to be able to communicate it to a worldwide audience.”