No niche hobby, gaming is predicted to reach 645 million viewers by 2022

There are few current trends in media and entertainment as exciting and fast-growing as eSports (an umbrella term encompassing competitive gaming across a number of distinct games), writes Jens Fischer, Signiant’s territory manager for DACH, Eastern Europe, Middle East and Japan.

Growing out of the humble origins of arcade tournaments and online-game play-throughs, eSports has experienced a meteoric rise recently, although tournaments have been broadcast by such channels as GIGA since the early 2000s.

Still, the growth that media organisations have witnessed in the past half-decade has been immensely impressive. In 2018, Newzoo predicted that, by 2021, eSports will become a bigger industry than traditional professional athletics, and the industry will see its first $100 million media-rights deal (an incredibly ambitious forecast). In a follow-up piece published in early 2019, it predicts an audience of 645 million viewers by 2022.

With this evolution comes a wealth of opportunities for organisations driving growth across media technology, especially those that better enable remote production and help facilitate fast, global multichannel distribution. This dynamic vertical combines the broadcasting opportunities of live sports coverage and entertainment with exciting differentiating factors that demand the aforementioned capabilities.

If media-tech enterprises want to seize on this boom, understanding the unique nature of esports production and distribution is important: there are some different challenges and opportunities compared with traditional sports productions.

Esports’ rise on the leaderboard explained

Although gaming tournaments have been around since the 1970s, esports as we know it bloomed in the 1990s, in the time of games such as DOOM, Unreal Tournament, and Starcraft. Still, the rate at which eSports has gone from niche hobby to mainstream phenomenon in more recent years is impressive, to say the least.

In a 2013 PCWorld article, writer Andrew Groen argued that the state of professional PC gaming could be attributed to its massive ‘economic rise of Asia.’ Although eSports had looked like a dying industry in the early 2000s, he suggested that the availability of free PC gaming centres and the prominence of competitive PC gaming in countries like South Korea not only helped to rescue esports but to position it for the mass appeal it’s currently enjoying.

Today, pro gaming is a dynamic and lucrative business on nearly every continent and shows no signs of slowing down. With a wide range of games — such as League of Legends (LoL), DOTA 2, the aforementioned Overwatch, Counter-Strike, and Fortnite — competitive-gaming enthusiasts can easily find a challenge that suits their individual tastes.

With the introduction of streaming-community services like Twitch, professional-gaming competitions are as accessible as the largest sports events (for example, the 2017 LoL semifinals had a viewership of more than 80 million people), and major brands like Mercedes-Benz, Toyota, DHL, Coca-Cola, and Spotify have arranged sponsorship deals with global leagues like OWL, ESL One, or IEM. And Disney XD, ESPN, and ABC have teamed up with the leagues to form broadcast partnerships. Brands are beginning to recognise eSports as one of the best ways to market to younger demographics, who might otherwise be harder to reach, and it’s likely that these sponsorships will only increase in prevalence.

Now that it’s clear that eSports is a big deal and only getting bigger, it’s essential that media-technology businesses understand what this means for them: how they fit into the emerging puzzle.

Recently, VentureBeat published the transcript of its eSports panel at the 2019 National Association of Broadcasting (NAB) convention. The wide-ranging conversation explored the nuances of broadcasting esports competitions and how they superficially resemble regular sports broadcasting while exhibiting some fundamental differences (more-complex technology, the integration of additional workflows such as social-media promotion, etc.) in the production needs.

Matt Edelman, chief commercial officer, Super League Gaming, suggests, “If you’re interested in esports [and] relatively new to esports, it will help if you think of eSports as sports.” 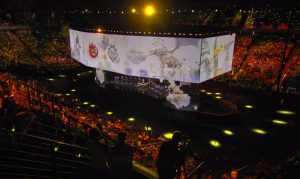 Although this is definitely a helpful way to consider its current cultural import, from a production and broadcast standpoint, there are some crucial distinctions. Certainly, some of the same technology and production equipment is used, but we see critical differentiators in production workflows. eSports events are often much longer, so that logging and metadata become key for postproduction and social-media teams. Furthermore, we have to consider the in-game workflows and the different limitations coming from the observer itself.

Although traditional sports and other live events have started to adopt at-home, or centralised, production, eSports seems to be pushing that model further and faster to reduce production costs and streamline global workflows. Additionally, at-home production makes central archiving easier, allows postproduction and social-media teams to stay at home, involves less opex, and ensures that employees don’t have to travel unnecessarily.

With this model, much of the editing, creation of graphics, and addition of audio effects is done predominantly at a home facility away from the venue. This means that every single one of these massive events requires solutions that can facilitate constant, complex workflows that depend on swift and secure file transfers to and from the venue in near real time over public and private IP networks.

Furthermore, we see much faster adoption of cloud-based workflows in the esports industry as well. That isn´t really a big surprise, when we consider that all the multiplayer games are living in the cloud already. With major publishers operating their own private WANs around the world, it´s just a natural step to shift more and more traditional broadcasting jobs into the cloud. A good example is Blizzard’s OWL production. Blizzard uses AWS Services to add localized graphics for different MRLs and regions and to transcode up to 37 individual video streams.

The ability of broadcasters to handle all these components and production conditions as quickly as possible is absolutely essential for, as VentureBeat notes, the battle for eyeballs, which is particularly hectic with esports. In addition, social-media relevance demands deployment of content ASAP. Even posting content five minutes late can make it less desirable.

Moreover, although a football or basketball game might be broadcast only on a single channel because of exclusive media-rights deals, esports events are often broadcast on multiple channels across multiple platforms without geo-blocking. Therefore, being able to move content quickly and create dynamic and attention-grabbing coverage under the real-time pressures of a given tournament is vital.

The final component that makes eSports such fertile ground for media-technology businesses is the timeframe in which events take place. Since the debut of Twitch, gamers have been able to stream uninterrupted for days, and esports competitions can last an entire weekend or longer.

Gaming fans are used to tuning in for extended periods, and, whereas a basketball game might just take up a solid three hours of someone’s afternoon, eSports enthusiasts tune in and out or even watch for an entire day. This means broadcasters are constantly moving files over a long period of time, and they demand solutions that can handle such conditions.

Gaming around the world

Another crucial element for media-technology organisations to consider is that eSports is a global phenomenon (the 2019 Newzoo article estimates that 57% of esports enthusiasts are in the Asia-Pacific region), and the way in which fans tune in reflects that.

Whereas football fans might have a favorite local club or cricket fans a regional rivalry, esports fans largely follow individual players. Geographic loyalty or team obsession is much less prevalent in this vertical, so, even if you live in Dubai, you could be dedicatedly following a gamer based in Tokyo (although organisations like Blizzard are trying to get fans invested in local teams through leagues like OWL). Compounding this, beneath the eSports umbrella, there are enthusiasts who care about only one game out of the dozens that currently drive eSports’ popularity.

eSports also serves the purpose of educating or engaging new gamers with the mechanics of games at which they might still be novices. Said EA head of broadcasting Joe Lynch, speaking on the NAB panel, “Going by all these stats that we’ve looked at, the vast majority of the people who are watching are watching to learn. … As broadcasters and storytellers, we have to spend a lot of time teaching. NFL football games don’t do that. … They’ll do a little to explain the basic rules so you can enjoy the game, but they’re not going to go into the minutiae. … Those are the things we have to do as storytellers, and that part is really different.”

What does all this mean for distribution? Well, on a basic level, the distribution net for esports is far wider than for any other type of sports. If I’m an Overwatch super fan, I’m going to tune into OWL competitions no matter where in the world they are, time difference be damned. And, if I can’t check out a tournament because that time difference is a factor, I’m going to want (or expect) that I can watch that tournament at a different time, at my convenience.

Esports Is here to stay

The bottom line is simple: esports isn’t going anywhere. In 2018 alone, the industry saw $4.5 billion in investment. The market, as it stands, is experiencing immense growth and a heretofore undreamt-of level of legitimacy, and with that comes a trove of needs and opportunities that media-technology businesses should be paying extremely close attention to.

At-home production and global distribution are elemental to eSports, and with that comes an incredible demand for solutions that can support the workflows and the omnichannel content push that defines the industry. This will continue to be a growth driver for media technology and, certainly, for Signiant, as we provide intelligent file-transfer solutions to the entire value chain, including the game developers themselves, the broadcasters, and online streaming services.

No matter what your niche is, it would be absolutely foolish to dismiss esports as a fad. In the past, pro gaming might have been seen as a temporary craze or a fringe hobby, but the past half decade has done wonders to disprove that assumption. Dubai even announced construction of the first esports-exclusive stadium in the Middle East.

The eSports wave is sweeping the world, and media-technology organisations should be paying attention. When it comes to production and distribution, the chances are immense.

If you’re committed to innovation, you’ll go where the innovators are.