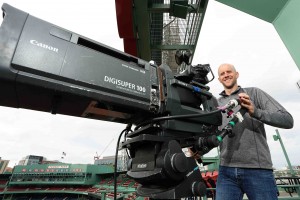 Tom Guilmette: “What’s really unique about the Vector line is its physical design”

Now Vinten, a provider of manual and robotic camera support systems and a Vitec Group brand, has released a new whitepaper ‘Supporting the 4K Revolution in Sports Broadcasting.’ With more global sports networks switching to 4K resolution, this whitepaper – written by the Vinten Product Manager Philip Dalgoutte – examines the importance of camera supports in 4K and UHD adoption for sports video production.

“4K and UHD sports production offer both exciting potential and unusual challenges for networks. While special attention has been given to ensure that camera sensors and lenses are 4K ready, these investments only cater to static images. It is equally important to consider the camera supports and their ability to deliver high quality moving images in a sports environment,” writes Dalgoutte.

Vinten has helped camera operators get 4K ready through its unique pantographic perfect balance system. Since it doesn’t use springs or cams, this design minimizes the inertia of the moving camera and lens, allowing consistent movement and easy positioning at any angle. Moreover, its TF drag system also delivers complete control at any level of movement, infinite adjustment without steps, instant whip pan without manual drag reduction, and a fast setup. These Vinten-specific features enable the camera operator to capture the perfect shot with minimal effort and eliminates physical strain while working long hours.

Director of Photography Tom Guilmette has worked on nearly 1,000 Boston Red Sox games, the Super Bowl, and the Olympics, along with other major sporting events for FOX and CBS. Operating the latest HD and UHD camera technology from camera manufacturers such as Ikegami, Thompson, and Sony, Guilmette chooses the Vinten Vector Series with its pantographic design when covering sports.

“What’s really unique about the Vector line is its physical design. The head can breathe or expand through the pantographic design and that allows it to rise and lower as you tilt up and down. When it expands like that, it moves the center of gravity of that huge camera and keeps it in line. So as you tilt down, the centre of gravity raises up with it, giving you even more control of the camera. A tilt-over-centre head that’s on a hinge or standard tripod really doesn’t have that same type of control, so it’s important to have Vinten’s unique pantographic design when using a large camera and lens systems,” said Guilmette.

To read the complete whitepaper on the significance of camera supports in 4K and UHD adoption, click here.