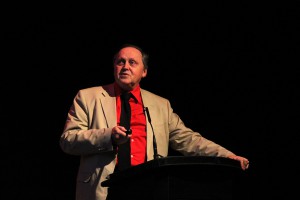 David Wood: “To some, the HDR ‘gain’ is more valuable than more definition, because you notice it further back from the TV set”

Ultra HD sets could make up nearly half of all global TV set sales in four years time, but will they all be technologically obsolete? Most of them will be incapable of displaying the full range of brightness and colours available in updated versions of the Ultra HD image specification.

Futuresource Consulting forecasts a healthier business for TV screen vendors ahead, driven in part by demand for 4K sets which it reckons will account for 42% of the global total by 2018, up from just 5% this year. However, if the body responsible for writing the Ultra HD broadcast standard agrees to incorporate additional specifications for high dynamic range (HDR) then very few of these displays will be capable of showing 4K to its highest glory.

The International Telecommunication Union (ITU) ratified Ultra HD in May 2012, split into a 4K version and a 8K full-fat flavour pursued by NHK in Japan. Hollywood creatives are leading a call for an enriched version of 4K UHD which puts colour and dynamic range to the fore. The ITU is now considering adding this to a revised spec due for release in 2017.

David Wood (pictured), chairman of the relevant ITU group, said at a recent SMPTE summit on Digital Cinema: “Those who have seen demonstrations of high dynamic range on TV screens find that it does increase the perception of image quality significantly. To some, the HDR ‘gain’ is more valuable than more definition, because you notice it further back from the TV set. But the benefit you get depends on the content that the programme maker provides.”

Lens to post mastering and grading pipelines from Dolby and Technicolor include a means of displaying HDR content on professional and consumer sets. HDR is measured in NITS, an obscure term where 4000 NITS is considered optimal but where existing sets only show around a hundredth of that range. Sharp, Vizio and TCL Multimedia are among vendors to have signed to support Dolby Vision in forthcoming consumer product.

According to Wood, the ITU is also considering HDR format options from Philips, and the BBC. “The plan is to perform quality evaluations that will allow them to be ranked for effectiveness,” said Wood. These tests will be conducted by an ITU group lead by the BBC’s head of HD technology, Andy Quested.

For sports broadcasters it is not so much high dynamic range that concerns them so much as higher frame rate to avoid unsightly motion blur when images are panned or slowed down for replay on larger flat panels. BSkyB, for example, is making frame rates of at least 50p and arguably 60-120p pre-requisite before it will launch into 4K live.

The aspect of the ITU recommendation for UHDTV that caters for colour, frame rate and dynamic range is Rec 2020. This already had the foresight to include frame rates up to 120p and a 12 point bit-depth for colour. The new HDMI 2.0 connecting standard can deliver this spec but the issue lies in delivering the signal to the screen, according to Dolby.

“When you acquire content with much higher bit depth its quality is dumbed down on the display to 8-bit,” explained Roland Vlaicu, Dolby’s senior director of Broadcast Imaging. “If we were to change the bit depth of every pixel today to 12-bit, it would not be compatible with any existing display system. Our proposal is to maintain a higher bit depth for every pixel up to 12-bit and 16-bit – or one day even higher – from the moment of capture to the home. We need to modify the signal to make it compatible with today’s infrastructure.”

At the recent digital cinema summit, Richard Welch, a SMPTE governor for EMEA, observed that while HDR does provide a far bigger creative and aesthetic difference than resolution, marketing it will be tricky and hard for people to envision.

“In order to sell [HDR] consumers need a number they can understand, and they all understand pixel count,” he said. “We know that from the camera industry, where they go for megapixels. But the numbers for HDR [NITs] aren’t the sort of numbers you can throw out to consumers to tell that story. The engineering and creative side of the industry understand HDR but it’s hard to sell.”