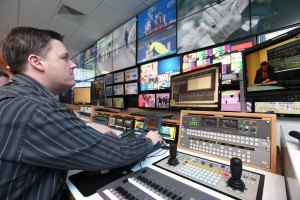 With close to 2400 premises, William Hill is the largest operator of betting shops in the UK. Since 2009, the group has operated its own television channel with a mixture of its own content and live feeds from horse racing meetings. The output from the channel is shown in the betting shops, and through William Hill’s web and mobile platforms. Earlier this month, it launched a new £1 million production facility in the Yorkshire city of Leeds.

“These are the best broadcast facilities in the industry,” said Michael Grenham, William Hill’s Head of Broadcast. “They provide us with the tools and resources to significantly improve our service to our customers.”

Grenham reports that a minimum of 50 hours of live TV programming will be broadcast from the studio each week. “Operating seven days a week, and broadcasting from 0800 to 220 hours, we will continue to take in feeds from multiple racecourses and from other events on an ad hoc basis. And we are looking to develop further these additional areas that are of interest to our viewers.”

The Leeds facility includes one 36 square metre television studio, a green screen area and three radio studios. Panasonic cameras (one AW-HE870 and two AW-E860) are employed, all controlled robotically by a Panasonic Multi event controller AW-RP655 panel. This panel can store up to 50 presets per camera channel.

The gallery also includes a For-A HVS 350HS vision mixer. This 1.5 M/E model was selected, says Grenham, for its compact design and good value. Like many similar operations, directors carry out their own vision mixing in the gallery.

Audio requirements are handled by an Audio Developments AD144 sound mixer. Designed for small studios – as well as location and OB work – the console has twelve inputs each with  a three band equalizer, phase switch and separate routing switches for the four main groups. There are four outputs and four auxiliaries, with M-S stereo facilities on both inputs and outputs. For graphics, Grenham has opted for a ChyronHego system.  To reduce heat in the studio, all the lighting comes from LED sources.

The studio, which took three months to build, was designed by BDA Creative, who previously worked with BBC News and Sport, Sky News, BT Sport, Channel 4 and Match of the Day. “Our brief was to ‘install a TV set that reflects the company brand and allows the Broadcast department the flexibility to execute differing production formats from within a single studio space’,” explained Will Smith, set designer at BDA Creative. “We looked to create a flexible space that could adapt to different requirements through scenic lighting setups that referenced specific programmes, but all the time maintaining core brand colours throughout.”

Smith says that the creative team were also conscious of creating a physically flexible space which would afford shots both through the studio glazing into the William Hill control centre and against a bespoke virtual 3d space. “We were also aware that William Hill had aspirations to do some green screen work, so therefore the set had to be flexible enough to reconfigure for this usage.”

He emphasises that during the early stages of such projects it is important to interact with production/technical/lighting personnel in the costing process. “Having input from across the disciplines early allows us to consider what is really feasible and practical within both the physical space and in terms of budget.”

Grenham concluded, “The fact that we now have facilities that will allow us to provide quality content for all our various channels — Retail, Online, Mobile, even International — from just one hub is enormously exciting. This is a major investment and allows us huge flexibility to expand our broadcast capabilities and improve our programming. We can now offer a truly integrated, targeted, service.”