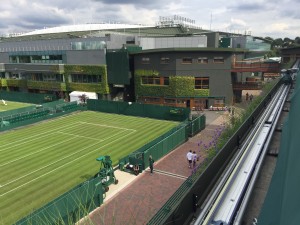 Aerial Camera Systems (ACS) has a long history of supplying specialist cameras to various clients at the Wimbledon Championships, including the All England Lawn Tennis Club (AELTC) itself. In recent years 2-3 new camera positions have been added on an annual basis, and that pattern continues in 2017, with ACS handling a total of 30 camera positions for three customers.

For BBC Sport – which is serving as the host broadcaster, the company is “providing a hoist camera with HD stabilised mount (HD Cineflex V14) to provide lovely shots of the whole venue, as well as some outside court coverage,” says ACS sales director Matt Coyde. “We have also got the baseline track cameras on both Centre and No. 1 Court – they are effectively the same as last year – and umpire chair cameras on these two courts.”

Brand new for the BBC is a robotic camera on Court 14, which has returned to active service this year. “That is mounted on the outside wall of the Centre Court building, which is really the only way that you can achieve coverage of that camera position,” says Coyde.

In total, ACS is providing six camera positions for the BBC – “”all of which have been very tightly integrated into the coverage of the tournament” – as well as an eight-strong crew (working on rotation).

ACS has also furnished NEP with two camera positions. The Court 2 SSM remote position features a pan bar controller specifically designed for SMARThead – the ACS-developed compact remote head designed to provide a comprehensive solution for high-end remote camera applications. New for 2017 is an additional camera on Centre Court that offers a “low-angle shot of the action from the corner opposite the side of the umpire’s chair.”

For the AELTC itself, this year has brought “quite a lot of changes” to the beauty-cam positions. Perhaps most significantly, the rail-cam introduced on No. 1 Court last year has not been possible to install this year due to building works. “The Club also wanted to achieve different shots from a creative perspective, so we have added a rail-cam on the broadcast centre roof, located on the lip below where the interviews take place,” says Coyde.

Elsewhere, the short rail-cam formerly located on Court 3 has been moved to Court 2 and extended to 24 metres, and “now provides some fantastic shots looking over the outside courts”. On Court 3, the beauty-cam position has been updated to a SMARThead compact remote head with 100x lens, whilst further camera positions have been added to the practice area, the Player’s Balcony, and the No.1 Court roof overlooking Henman Hill.

“We have also expanded the operation in the OB compound, with a second Portakabin added and some more work undertaken to improve the engineering services in that area.”

Of the overall refinements and additions made this year, Coyde reports “very positive feedback from the broadcasters”. Looking ahead, 2018 is set to be a milestone year for the broadcasting of the Wimbledon championships with some significant changes planned to the host broadcast operation. As of now, ACS “has had some initial conversations about next year, but I expect that it will be in the autumn that we get down to more detailed discussions.”