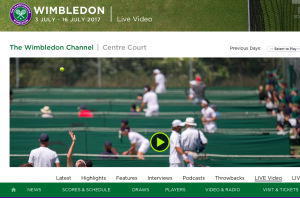 Ahead of what is expected to be a momentous 2018 for the broadcasting of the Wimbledon Championships, this year’s tournament reveals that further refinement – rather than radical change – is the order of the day. Shortly before the start of the 2017 championship, SVG Europe spoke to IMG director of engineering Alan Bright about the latest developments.

What specifically is new for 2017?

Just to give you the full context, this year we are involved with the host broadcast – the BBC is doing that. What IMG is doing is the world feed; we take what we think are the most popular matches, or those we feel are most in demand, and package those for rights holders around the word. We package a commentary for the world feed; we do a slightly modified version for the European audience with a European feel; and we edit a highlights package that goes out every night at 9.30.

In addition to this, we work on the Wimbledon Channel – which is about ten hours of continuous programming per day presented from a rooftop studio – as well as radio version.

And there have been changes to the Wimbledon Channel this year…

Yes, the previous Live @ Wimbledon name has been dropped in favour of the Wimbledon Channel. We have also put in 3 RF Cameras around the cameras and some cabled positions as well to give more of a feel of the atmosphere of the event and a sense of what it means to be at Wimbledon. So we tend to start at 9am with some footage from the queue, then we might move into Centre Court, where we have an interview position, and then onto another position on Henman Hill. [In particular] it helps to give a flavour of the big matches and how critical they are.

Did the impetus for this different feel come from IMG or the club itself?

It came from the club. We have to be flexible and move with the times; the market does change. A lot of the Wimbledon Channel is now consumed over the internet, and the audience does not necessarily want a linear channel which you have to follow through the day. Instead it it sore about short clips, and plenty of them.

Can you talk about some of the other key aspects of the IMG service to broadcasters at Wimbledon?

Yes, on behalf of a lot of the broadcasters we ingest all the court feeds, record them, and make sure they are available to all the rights holding broadcasters who paid for this service. We call this the central content store and work with the BBC and the club to record and log everything. This makes it possible to access clips from any match very quickly.

IMG has been involved in digitising and archiving old matches for many years now – is that profess still ongoing?

Yes, it is. There can be problems with some of the older material in terms of [being able to transfer and digitise it]. One of the things that it is being looked at now is the possibility of making that material available through a web portal all year ‘round, so that it can achieve a much wider audience. The concept for that is being developed and tweaked as we proceed.