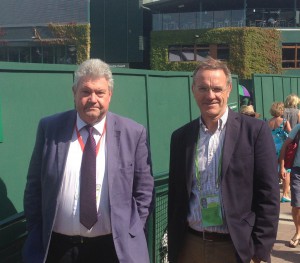 It should come as no surprise to find that AELTC head of broadcast Mervyn Hall’s office is a hive of activity during SVG Europe’s visit to Wimbledon. But while the enquiries and requests come thick and fast throughout our conversation, the man at the centre of operations seems to remain heroically calm. Maybe that’s not so surprising when you consider he has been in charge of broadcast operations at Wimbledon since 2002. Nonetheless, with pressure on space increasing all the time and new technologies continuing to emerge, it is clear that delivering a seamless experience for viewers all around the world remains very much a moving target…

What were the challenges involved in adding the NHK 8K demo to the existing set-up here in SW19?

The NHK team came here for a recce [well in advance], but one challenge was space… we don’t have a lot of space for demos and more crew rooms etc. But fortunately we already had plans to build four large new cabins on the roof and not that much pressure to put anything in them for the first year. So we gave NHK three of those to use and then decided to reconfigure the roof [of the Broadcast Centre] so that we could have a tent to house the 8K theatre. In the end, it just about fitted!

Oh yes, it’s bulging… we have about 2,500 people in here during the tournament. In terms of how we address this for the future, there is a plan in place and has been for some time. More than anything the focus will be on being more imaginative about the space we already have, although it is possible that we could take a little extra space or make something more permanent in the area where the cabins are located.

This building is quite old now, but the reality is that there isn’t presently much potential to construct a new Broadcast Centre as we don’t have sufficient time between tournaments, and where would we put it anyway?

What was the thinking behind the extra camera positions added over the last few years?

I think there had been a feeling, particularly among some of the broadcasters overseas, that we had a beautiful site here and were not being smart enough at showing it off. So that is something we have acknowledged and invested in accordingly, and the integration of these new cameras [into the existing set-up] has been very successful. Remote cameras have been an important part of this development. We might have been a little sniffy about them in the past, but they are now of an extremely high quality.

A static 4K camera on Centre Court for the benefit of club members aside, there is no 4K component to this year’s tournament: so how long do you think it will be before we see routine 4K capture on the show courts at least?

It will happen. My estimate would be between 2018 and 2020. As I said, we do like to innovate whenever we can and do feel we should be at the front-end of new technology. Now you could argue that our foray into 3D was fairly unsuccessful, but that was because 3D itself was unsuccessful. My feeling is that if 4K becomes successful we will benefit from having been there at the beginning.