Wimbledon Reflections: IMG and IBM use SmartCart SVX for analysis and feedback 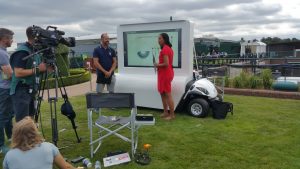 On site with SmartCart at Wimbledon 2017

The Wimbledon Channel, the official digital channel of The Championships, deployed the SmartCart SVX outdoor mobile interactive touch screen system throughout this year’s Championships. Designed specifically for live production use by TV sports broadcasters worldwide, the SmartCart overcomes a number of design hurdles and physical constraints in order to provide a highly reliable touch experience and overall system reliability.

With a screen as bright as the latest stadium screens in full daylight, SmartCart has been developed to add a new dimension to broadcast sports fans events via the inclusion of game analysis, viewer feedback, interviews and other material from one platform.

All of which made it an ideal fit for The Wimbledon Channel. SmartCart owner and founder Gil Cowie explains that the system “was being used for the IBM ‘Daily Debate’ and throughout the day for formal live presentations, in-depth professional match play telestrated analysis, data and scoring, social media feedback, and interviews with players such as Coco Vandeweghe, Dustin Brown and Kyle Edmund.

“The two daily presenters, Craig [O’Shannessy] and Nick [McCarvel] proved exceptional in terms of driving this facility to engage the viewing fans.”

In terms of adding to the overall scope and impact of the coverage, Cowie says that SmartCart “captures the live drama of the event by being amongst the action and providing a greater sense of being at the event than a conventional studio. There is also greater engagement for the viewing fans.”

As well as its debut appearance at a major tennis tournament, SmartCart recorded a number of other recent sports customers, including CBS Sports on the US PGA Tour and ESPN at last year’s Euro 2016 football championships.

With more high-profile projects on the horizon, Cowie is convinced that SmartCart has a bright outlook. “We are confident that SmartCart has a great future as a very cost effective presentation, analysis tool and interview hub given the ever-increasing cost of sports broadcasting rights – which are generating internal demands for OB sports production cost reduction by broadcasters – and the exciting capabilities we offer for remote production,” he says. “It also enables coverage of lower tier sports cost-effectively and allows a smaller broadcaster to provide a highly professional look at the game – on a budget.”