Wireless finesse: How EMG’s Broadcast RF bought every moment of the London Marathon 2022 to screens 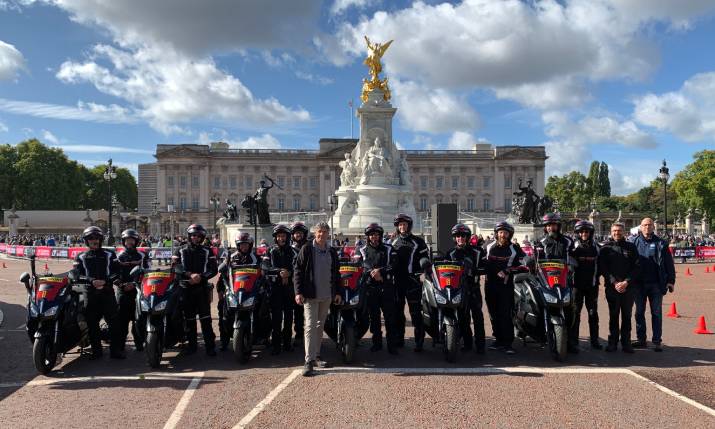 Much of the excitement of the London Marathon can only be caught with handheld-roaming, motorbike-mounted and tunnel-based cameras, each of which rely on radio frequency (RF) technology to bring those hard to get – but sought after – shots to screens on the BBC.

Once again EMG company, Broadcast RF, stepped in to bring its RF expertise to the London Marathon host broadcast production.

Broadcast RF supplied a plethora of cameras for the production of the Marathon, including one RF camera at Cutty Sark, three RF’s at Tower Bridge – one of which was a hi-mo – two RF’s at Limehouse, a cabled camera at Blackfriars that linked into EMG’s ground-based network, and at the finish of the race at Canada Gate in Green Park, a track cam, two handheld RF’s, plus two return video monitors so the talent team could see what was happening live on-air.

Broadcast RF also supplied the six electric motorbikes with camera operators and two helicopters used by the BBC to get those fantastic shots of the greatest race in the UK. They were linked up via a relay plane that started its journey in France and never touched UK soil. 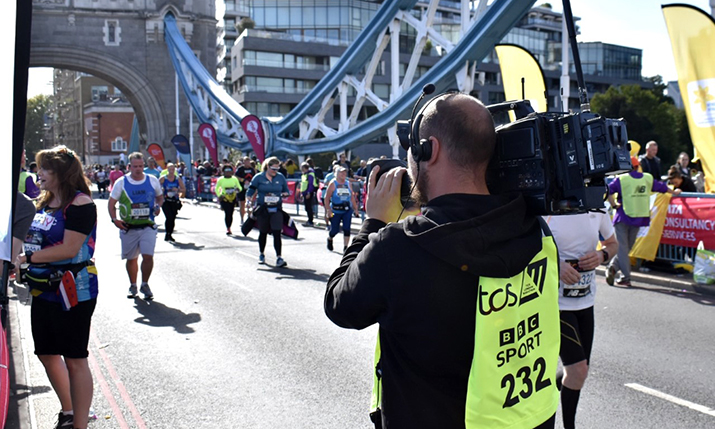 Says Chris Brandrick, Broadcast RF’s commercial director, on the plane relay system: “It flies in from France [prior to the Marathon], does a test, flies back, and then flies in on the shoot date. That’s the whole job. So it has an endurance of approximately seven and a half hours up in the air.

“All the helicopters and bikes go up via the plane; they get linked upwards to the plane, and relayed back down to our Canada Gate hoist – we had a 70 metre hoist peeking through the trees – on the day. [On the hoist was] an auto-steered dish that looks at the plane wherever it is in the atmosphere. I know I work in RF, but it’s amazing, the distances and speed that the pictures travel at.”

He comments on the system used to relay images from the cameras on the motorbikes to the OB: “It’s just amazing how the images are picked up so quickly using this system, even [before the Marathon] with our bikes literally sat in our car park ready for the test in Dartford and the plane [elsewhere], we were able to get pictures. When the plane’s actually overhead, the pictures are usable. That’s what I find amazing. That’s quite a distance of linking bikes, basically.”

He adds: “So, we’ve got two bikes on the wheelchairs, two on the women’s Elite, two on the men’s Elite, and as they finish their coverage, they turn back and go and help out with the other coverage, some of the front runners. [How they’re used is] just communicated by the director once they’re finished with.”

Around four years ago EMG came up with a solution for enhanced bike coverage to enable the race coverage to continue underground, through the tunnels in the Blackfriars area of the race, which is where – particularly on the Elite races – lead groups tend to start to jostle for position.

Says Brandrick: “What happens is that if there’s an over-take in that [Blackfriars] tunnel, which there has been in previous years, you would cut to a helicopter or a beauty shot, and then they come out the other end near to the finish they all would have changed position. But, this is the beauty now; you can get full coverage for all of those tunnels towards the end, and that is when people start to make their challenges to win as well. It’s a good two miles before the end so the pace goes up. A lot of people make their move then, they don’t save it till the end.”

Brandrick explains: “Towards the end [of the Marathon], so when you get to Blackfriars on the last three miles, you start getting a lot of tunnels. There’s a huge Blackfriars underpass, which is about 500 metres-worth of tunnel. Previously, when the bikes went under that, you lose pictures because it can’t penetrate through concrete and buildings above it to go upwards to the plane. So what we do there is we put a ground-based infrastructure in, so it intelligently switches from going up to a plane to receiving on the ground. We link that back from Blackfriars via some buildings to Canada Gates.

“So now, when they get to that point in the race, the director doesn’t need to worry about cutting away from the bikes because they’re going under the multiple tunnels and underpasses just before they get to the Embankment; we’ve got extra resource to receive that, and switch it back at the OB.

“The funniest thing, the first time we’d done this, the cameraman relaxed and went, “What, I at least get rest”. He didn’t open up his iris [on his camera] so we had pictures, but the pictures were dark because he didn’t realise he was going to be on air. That happened a few years ago, but this time now they know they’re on air all the time.” 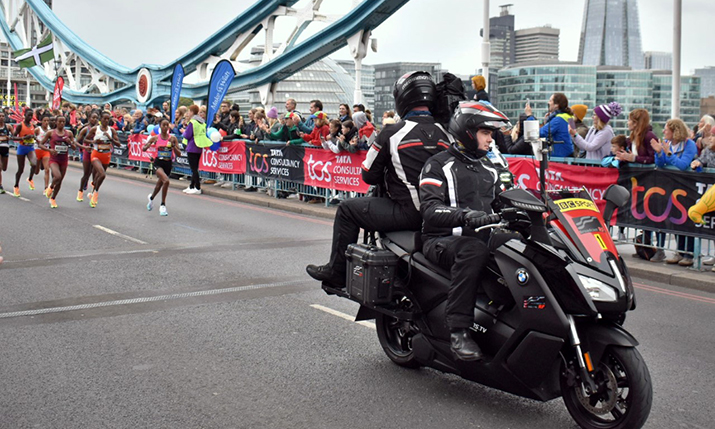 Brandrick adds that the technology being used for this enhanced bike coverage is developed inhouse by EMG, and also used on races such as Tour de France: “With every year, we gradually increase or change the technology we use for our enhanced bike coverage in those underground sections a little bit, just to make it work better. But, I think they pretty much got 100% this year. That was the beauty of it; it just all switched over when it was meant to switch over. And that the receivers, the final receivers at Canada Gate, don’t know if it’s taking the image from the plane or the ground receive sites, because the switching is seamless and intelligent. They just know there’s a clean image and it doesn’t break up, and it looks good.”

He notes that EMG saved using an additional OB van at this section of the race: “At Blackfriars, instead of having an OB truck there, as it’s essential for our ground-based receive for the final leg, we put an operational van in there. So we had one cabled camera there, and allowed that to go back into our network of ground receivers, and end up at Canada Gate. So, we saved a whole OB truck [from being positioned] at Blackfriars, and the cameraman there had full talk back as if he was connected to Canada Gate.” 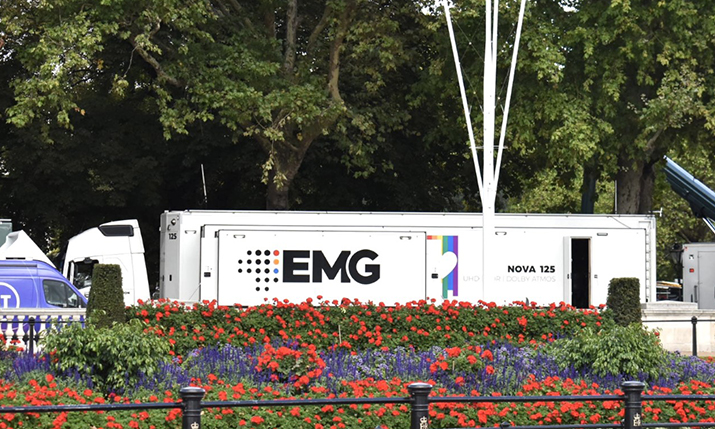 On the challenges of bringing the London Marathon to viewers around the world via the BBC, this year the death of Queen Elizabeth II created a logistic challenge for EMG’s teams, who, like many other OB firms, had been out in force to broadcast the Queen’s funeral on Monday 19 September.

Brandrick explains: “The biggest challenge this year was Operation Lion, the Queen’s funeral. That took the whole company’s resource away from us for two weeks. Then, all our crews needed a rest, then they needed to go straight into the London Marathon. People were like, “yeah, great, you just delivered the biggest show on the planet. However, we’ve got to do the London Marathon now,” which is quite a big job.

“I know the BBC were a bit concerned. We were also a bit concerned, but we just worked through the night and squeezed a job that should have been planned and executed in two or three months into two or three weeks. It was really difficult, but we got it done. We just threw resources at it. That was the biggest challenge.”

Others facing challenges on the day of the Marathon this year were three members of the EMG team. The company had three runners in the race, with chief commercial officer, Bevan Gibson, RF professional Matt Bowers, and Rémi Chasles, CEO at EMG’s Origins Digital in France, who completed the race in an extremely impressive two hours 57 minutes.

Notes Brandrick: “The next challenge is getting the ready for the end of the year where there is simply lots and lots of football on the agenda. Everything’s been squeezed to a difficult deliverable, but we’re fine and we’re going to make it,” he concludes.