Woman in a man’s world: Lise Cosimi-Breant from HBS on success in sports broadcast

Lise Cosimi-Breant is chief of external relations at HBS. She has over two decades of knowledge of making Host Broadcast services at sporting events work smoothly, from FIFA World Cups to major multi-sport championships, which is no mean feat. 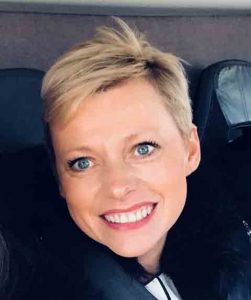 Today she has over 300 people in her team for her current events across eight departments at HBS, all of whom need to be managed over whichever events the company is working on.

This year, the big events for HBS and Cosimi-Breant are the FIFA World Cup Finals in Russia, kicking off in June, and The Asian Games that begin in Indonesia this coming August.

“At the moment my role is to coordinate people and make sure these events happen smoothly, make sure they happen the right way, and that decisions are always correct. This is going to be the sixth World Cup that I cover, and the second time we have run the Asian Games in its entirety,” says Cosimi-Breant.

Cosimi-Breant studied languages and has a diploma in translation and interpretation of English, German and Italian. Thanks to a friend of her mother’s, her first significant job was working for Team Marketing (UEFA marketing agency) when the Paris Saint Germain Football Club entered the Champions League. She then joined the Club to help coordinate the transfer of players through her role as a translator there. After that, she moved to Eurosport as communications coordinator, then to TVRS as information manager while the company was Host Broadcaster of the 1998 FIFA World Cup. Her next move 17 years ago was to begin her career at HBS.

Facing up to challenges

Cosimi-Breant’s role is full of challenges, as you can imagine managing a team of 300 for mission-critical broadcasts of multiple massive global sporting events would be. She comments: “Delivery is always the biggest challenge. Failure is not an option! It’s about having so many topics to cover, multitasking for multiple events. Running two major events as I am now, is just horrible! There are a lot of staff, a lot of topics to be on top of, and you have to make the right decisions at the right time, every time.”

She adds: “Plus time-wise, both events are one after the other, and they have nothing in common to make it slightly easier; one is football, the other is multi-sport, one is run by a football federation, the other is run by a local organising committee. This means that every day as you work across both events you have to keep changing your thinking, legally, politically and geographically. It’s never the same approach to the two clients, as they’re so different. It’s very challenging to stay on board with all the topics that need to be covered and never make any wrong decisions.”

A woman in the world of football 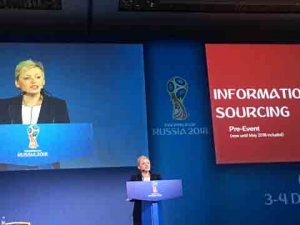 Apart from the day to day issues of her career, her gender has created further challenges for Cosimi-Breant. Being one of the few women at the FIFA World Cups for the last 21 years has created its own issues. When the World Cup’s are running, Cosimi-Breant has to be present at all times; she manages the teams and has decades of experience of these tournaments, so her knowledge in invaluable to HBS. However, this means she is out of the country for significant periods of time. She notes that in 2017, without a World Cup or other major event such as this year’s Asian Games, she was still out of her home country on the road for 90 days. In 2006, when she was also working at a World Cup and an Asian Games, as she will be again this year, she was out of the country for six months. With a family as well as a high flying career, this causes complications.

In 1999 Cosimi-Breant was pregnant with her daughter during the preparation for the World Cup in Korea-Japan. She comments: “I was the first woman to be having a baby in the core team staff. Then in 2002, working at the World Cup for two or three months, I had to leave her [my daughter] for three months to go to Korea and Japan for the next World Cup, and it was terrible being away from her.

“So I changed the game for the 2006 World Cup in Germany,” she states. “I said to my boss I either wanted my daughter with me, or I will travel back and forth because when I’m working at the World Cup, I’m there for the entire period. He wanted me by his side, and so during the event, we arranged a full babysitting system with nannies and kids going to school, available for all HBS staff, women and men, at the event. This was a real game changer. My daughter, who was six years old at the time, went to a French school in Munich.”

Old fashioned views of the stay-at-home-mum are irrelevant today when you have the right structure in place to be able to manage both a career and a family, and Cosimi-Breanthas created that with her husband’s support. However, it isn’t always easy. “As a mum when you travel so much, you feel guilty; you’re never in the right place; when you’re at home you’re thinking about work, and when you’re at work you’re thinking about home. But as a travelling mum, my husband accepts that when I’m away he has to manage the home, so it works.”

One point of irritation for Cosimi-Breant has been that fact that as a woman in what has been, and still is, a man’s world – that of football – she feels she has to work twice as hard as a man to prove herself. She explains: “Even if you have more experience of the venue and the stadiums than anyone else, you have to prove yourself all the time, shouting louder, showing you’re doing more, showing you know more, especially when you’re on the pitch. They [men] just look at you and literally treat you like you’re the secretary; I have to inform them, “No, I’m the boss”.”

Games have to be changed if women are to succeed in many areas of sports broadcast, and Cosimi is proactive in helping to bring women together so they can work to make those changes needed for them to move forward. With something as logical as a child care system on the ground for each World Cup to enable women to balance their lives more easily, doors are opened for more women to be able to take this career path rather than be ostracised by the dedication and long hours (and months) it often requires, notes Cosimi: “It is both a decision to be made on the women side and a solution found on the employer’s side. Efforts have to be made on both sides to find the right balance. Still, you can never have it all!”

Empowering women in the workplace

Cosimi-Breant is now implementing an HR programme at HBS to help women within the organisation move up the corporate ladder. The company is using a consultant to work out what it can do for the young generation of women that want to push their careers higher. They have recently employed a female engineer, and are looking at networking events for women within the business. “We need more women engineers and we need to help each other get some traction to be able to get up the corporate ladder. What we apply externally, we try to do internally as well,” says Cosimi.

Yet on how she has seen the sports broadcast industry evolve for women working within it over the course of her career, Cosimi-Breant is damning: “It hasn’t changed,” she states. “But now women are trying to get organised. They are more into networking and helping each other. Our industry will change, eventually, but it will be one of the last ones, because we haven’t got enough women in it in the first place,” she comments, referring to the endemic maleness of sports broadcast at a roots level.

She explains: “Broadcast plus sport are two very traditional, old, male areas. Maybe the digital revolution is a good game changer for women thinking about moving into this industry; digital technology is attractive to women as well as men, so may bring more women into sports broadcast. I’m sure even for my daughter’s generation getting ahead in this industry will be difficult,” she concludes. “But there is hope.”

Cosimi-Breant is a key partner in SVG Europe’s Women In Sports Media Initiative. Click here to sign up for news and events.