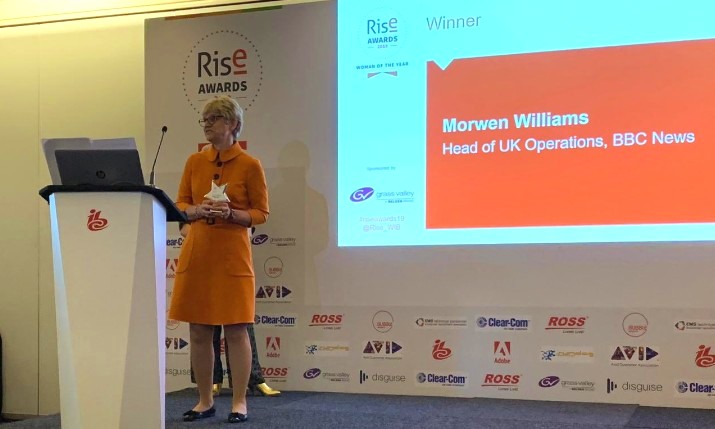 Morwen Williams, the head of UK operations at BBC News, was among the winners at the inaugural Rise Awards held during IBC 2019.

Supported by Avid, the awards were put together by Rise, the advocate group for gender diversity within the broadcast manufacturing and services sector.

Williams was presented with the Woman of The Year Award. Chosen by the Rise Advisory Board, Williams was said to have had an important year, having been both promoted to her current role and appointed as chair of the World’s Broadcasting Union’s International Media Connectivity Group.

In addition, she was chosen to complete an Executive Education programme at Harvard University on Media Transformation Challenge.

As well as her professional achievements, the board said: “She has relentless positivity and enthusiasm and is a fantastic role model across the sector. Although she is incredibly busy, she continues to take the time to be involved in the Rise mentoring programme and has been a superb mentor for the last two years.”

The awards received more than 100 entries.

The other winners of the 2019 Rise Awards, and those shortlisted, were:

The Rise Awards 2019 took place at the RAI Exhibition Centre in Amsterdam during IBC 2019.