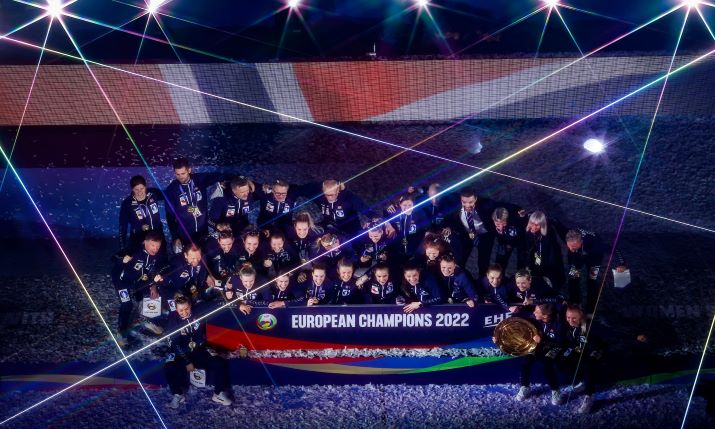 The Women’s European Handball Federation (EHF) Euro 2022 has set new viewership records in Denmark and Norway for the most watched TV events of the year, following the final between those two nations on Sunday 20 November.

In Norway, on average 986,000 people tuned into TV3 as the Norwegian national team won its ninth European Championship gold with a 27:25 victory against their Danish opponents.

Audience figures peaked at more than 1.1 million according to Viaplay Group, a market share of 74%, turning the final into the most watched commercial TV broadcast in Norway in 2022.

Strong viewing figures on Viaplay also ensured that the final became the most watched handball match of all time on the streaming service.

There was no lack of attention in Denmark either, as an average audience of more than 1.5 million also meant a market share of 74% for Danish broadcaster TV2.

The peak audience even stood at 1.7 million, making the final this year’s most watched programme on Danish television according to TV2 Denmark.

Martin Hausleitner, EHF secretary general, said: “Those are impressive numbers which we are proud of and which underline the value of handball in our key territories. Furthermore, it shows the very positive impact of women’s sports on the market. Looking also at the first digital figures, we are successfully reaching established as well as new audiences and have built a strong platform from which we can even further enhance the level and reach of women’s handball.”

Julien Ternisien, senior vice president summer sports at Infront, one of the EHF’s broadcast partners, said: “We were delighted to have secured coverage of the Women’s Euro 2022 in over 80 countries and these figures only go to show that the reach of the sport continues to grow. We have successfully built on every edition of the tournament and this result will provide a new benchmark for the EHF and Infront to focus on going forward.”

Other positives included Swedish broadcaster TV6 recording market shares of 18% for the 5/6 placement match, Sweden vs Netherlands. In Slovenia, one of the three host nations, the best market share was 22% on ‘Slovenija 2’ for the match Hungary versus Slovenia.

The Women’s EHF Euro 2022 also proved a hit with fans on the European Handball Federation’s owned and operated digital channels, especially among the federation’s Gen Z followership; a goal set by the 360-degree digital strategy crafted by the EHF and its media and marketing partners, Infront and DAZN Group.

For the first time at a women’s event, 14 dedicated shows were produced for the ‘Home of Handball’ Twitch channel, combining for more than 60 hours of live streaming and recording 1.17 million live views.

On TikTok, 33 videos posted since the end of October gathered 21 million views. The EHF saw its platform followers grow by 10% to 615,000 followers over the same period, making it the strongest within the EHF’s social media ecosystem.

Posts and stories on the EHF Euro’s Instagram channel were seen more than 26 million times over the course of the championship.

The Women’s EHF Euro 2022 was played in Slovenia, North Macedonia and Montenegro from 4 to 20 November 2022.