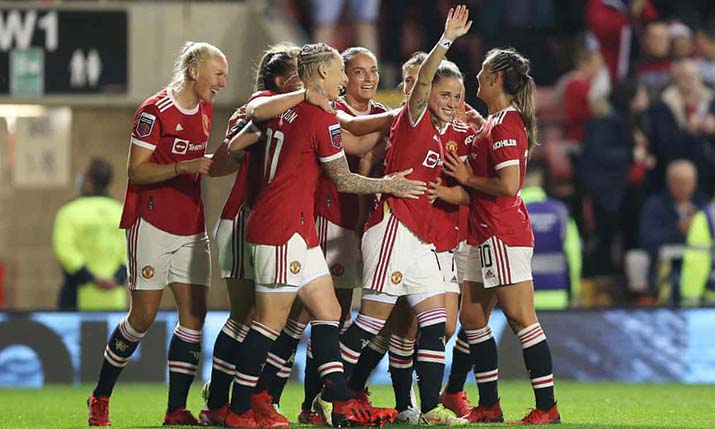 Interest in women’s sport has risen dramatically over the course of the pandemic, thanks to broadcast coverage such as the Women’s Super League and The Hundred during this time.

New data reveals 21% of UK adults have increased their following women’s sport more than they did 18 months ago, with 68% of those admitting a rise saying their new interest is driven by their enjoyment of recent broadcast coverage of women’s sport.

Additionally, according to the new report published by Sky Sports and Leaders in Sport, almost a quarter of men surveyed are following women’s sport more than pre-pandemic (24%).

Those polled also highlighted the importance of growing the media coverage of women’s sport with 19% saying that news reporting has made them want to tune in to watch or attend women’s sport in the last 18 months. While 41% believe that women’s sport should be treated the same as men’s sport when it hits our screens.

Away from news and broadcasting, nearly half of those surveyed insist there should be parity in marketing with both female and male athletes appearing in sports advertising (49%). While of those who have been watching more women’s sport, 32% agreed that they had learned more about women’s sport and its stars through advertising and social media.

Jonathan Licht, managing director, Sky Sports, said: “This report shows that women’s sport is again prospering and is overcoming the challenges posed by the pandemic. It’s fantastic to see from this data that its recovery has been bolstered by an increased appetite from the public.

“The success of The Hundred and the incredible viewing figures for the Women’s Super League at the start of the new broadcast deal highlight the momentum behind women’s sport. We’re excited to support and contribute to its long term success.”

Analysed in ‘Women’s Sport: bouncing back from the pandemic?’ the new data reveals the nation’s growing interest in women’s sport, with over two-thirds (68%) of those who follow more women’s sport stating that their enjoyment of broadcast coverage has fuelled that interest.

Fans were glued to screens this summer as sport returned with the delayed Men’s Euros and Olympics alongside domestic leagues. New research shows that eyeballs are increasingly focused on women’s sport with a significant rise in the number of men watching and engaging during the pandemic.

Tracey Crouch MP, and chair of fan-led review into football and former Sports minister, added: “This new research shows that despite the challenges of the pandemic, women’s sport has great resilience and is not just surviving but thriving after an exciting summer of sport. We must applaud the work of broadcasters like Sky Sports who have been innovative in the ways they have supported the growth of women’s sport which is driving more people to watch and follow.”

In the report, experts from the sports industry are interviewed to capture a snapshot of the threats and opportunities facing women’s sport, discussing strategies and leadership from the sector that are catalysing growth as it recovers from the worst impacts of the pandemic.

Laura McQueen, managing director, Leaders, commented: “Here at Leaders, we’ve proactively looked to champion the commercial development of women’s sport through multiple events, programmes and series over the past five years, all with the shared objective of accelerating the pace of change in the industry we know and love. While there is still plenty of work to do to achieve parity, we’re delighted to showcase that the appetite to watch and engage with women’s sport has drastically increased through the pandemic; and we’re proud to partner with Sky Sports to showcase these findings to the industry through a new, extensive report.”

Key findings:
• Commercial innovation: rights owners and broadcasters are looking at flexible approaches to build audiences such as The Hundred and WSL
• Advocacy is key: Male allies, especially the voices of male athletes should be sharing the stories of the female counterparts and wielding their influence in the industry. From those surveyed 24% agreed that male athletes should use their public profile to support women’s sport.
• Values over victory: Generation Z consumers are increasingly supporting sports in a way that prioritises the athletes over the sport itself, and idolising values over victory. Those polled showed there was more interest in supporting female athletes who were good role models off the pitch than their male counterparts (12% versus 7% respectively).