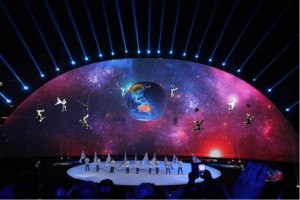 The World Air Games 2015 in Dubai got off to a dynamic start with an opening ceremony featuring extensive projection mapping by Protec (Production Technology LLC) using d3 Technologies’ 4x4pros in tandem with a BlackTrax real-time motion tracking system.

Protec, the region’s largest event rental company, was tasked with providing projection on a 54×21-meter hemispherical backdrop screen, the central 20×20-meter stage floor, and a 6-meter diameter rotating inflatable sphere that rose from the stage during the spectacle. Projection-mapping the moving sphere required the integration of BlackTrax and d3 to motion-track the moving sphere and map its surface with seamless, edge-blended images in real-time.

After aerial performers dressed as skydivers and paramotor pilots flew over the audience suspended on cables, the sphere rose from the stage displaying moving earth content, historical footage of the games, key statistics and the flags of the participating nations. The sphere was mapped with the games’ logo once the WAG torch was lit.

He cites d3’s ability, with BlackTrax, “to calibrate the projectors in 3D space with the use of an OSC app on an iPad to map pixel positions within each projector. The d3 is our preferred server for its ease of use and tight BlackTrax integration.”

Jones notes that a new d3 software release prior to the games introduced some new elements to the interface and menu structure. “d3 responded immediately to any questions we had and helped us get up to speed with the changes,” she says.