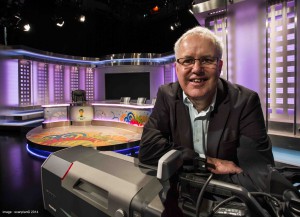 Eurotek managing director Kevin Moore on-set: “It was tight, but thankfully no hitches and everything worked”

Through an EU tender, Ireland’s public service broadcaster RTÉ moved into the final stage of its transition to HD with the studio installation of eight Sony cameras and Fujinon lenses in time for the World Cup kick-off on June 12. Having already upgraded most of its transmission and playout systems to HD, the studios were one of the key areas to address next on the RTÉ journey.

After a rigorous assessment process, the national broadcaster chose Sony HSC-300 studio cameras with digital triax output, supplied by Eurotek. This was important for RTÉ as all its studio cabling is triax-based. The tender was for 32 cameras over a four-year period, starting with an initial order for eight cameras. The cameras are configured with six ENG-style Fujinon lenses and two studio box lenses, supplied by Broadcast Video Services (BVS).

RTÉ studio infrastructure was already HD-capable so once the cameras were installed, the vision mixers were switched to HD mode so that the RTE 2 World Cup studio programmes could commence in HD across Saorview (DTT), UPC (cable) and Sky (satellite) distribution.

During a visit to the World Cup studio set, RTÉ project leader Terry Clarke told SVG Europe, “we were an SD station up until fairly recently. We made a strategic decision a couple of years ago that we would start moving into the HD domain.

“We started in 2012 when our transmission platforms were upgraded, with Saorview coming on stream. Our first HD studio was Studio 5, and that went live with the Euro Championships in 2012. We also replaced the station routing at that stage [Snell and Grass Valley] and a lot of the IRDs as well.

“Most of the infrastructure in the studios – all of the glue etc – was also upgraded to HD,” said Clarke. “The bit that was missing was cameras. We decided not to upgrade the cameras at that stage, for cost and a number of other reasons. Now we are getting round to doing the camera part of the studio upgrade.

“This project started at the beginning of 2014 with the publication of an EU tender. We put together a project team and went through the tender process evaluation, and Eurotek and Sony were picked as the preferred supplier of cameras. 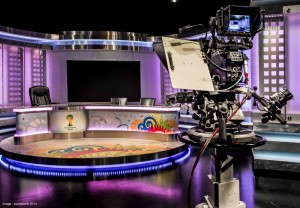 “We also did HD lenses, tendered at the same time and we went with a different supplier. We undertook a very rigorous test of all the cameras that were proposed. We formed a project team, including technology, cameras, lighting and tech ops. We looked for the most suitable camera from all points of view.

“Part of the tender was that we would want delivery for the beginning of June, in order to be ready for the World Cup,” said Clarke. “All of the manufacturers were aware of this and had to build that into their supply chain. And in fairness, Eurotek and Sony came up trumps, given a very short period between the end of the tender cool-off period and the issuing of an order. It worked out very well in the end. We hit all our deadlines.

“Our first programme was Soccer Republic on June 9, and then the World Cup started on June 12 and the cameras have been tied up in the studio ever since, all working as expected.”

RTÉ has a large installed base of triax cabling, not just within the television centre but other buildings as well. “We had done tests with HD last year,” said Clarke, “and we knew that HD would travel over the distance. So we thought, rather than replacing the whole lot at this stage with considerable cost and a different (ie fibre) infrastructure, from a technical and operational standpoint there was no reason to change. We expected it would work, and it looks perfectly good.”

Eurotek managing director Kevin Moore said, “Sony has digital triax, which basically puts an HD signal down a standard analogue triax. There is no compromise in performance. It is compressed, but really lightly compressed. That meant RTÉ could use their existing patching and cables, and they want to be able to move their cameras around multiple studios.

“If you were doing a new-build studio you might take another view,” added Moore, “but it wasn’t going to add an awful lot of value in this scenario to put in fibre. It also would have delayed the project; there’s no way you could have installed fibre within the timeframe unless it was done as a separate project – and in that case you would have had to make that decision at least a year ago.”

“The turnaround on this project was tight,” said Moore. “The tenders closed just before NAB and they went into a four to five week assessment period. A decision was made the end of the first week in May.

“RTÉ told us at the beginning of the second week in May that we were the preferred bidder – but EU rules state that there is a two-week cooling off period before a PO can be issued. All of which meant we had three weeks to turn the cameras around.

“One of the biggest issues we had was that Sony ships its cameras by default with Fischer connectors – and RTÉ uses Lemo connectors. Lemo had no connectors at the time, because with the World Cup coming up everyone in the UK had ordered and cleared them out!

“Their first availability on connectors was the 30th of May, so we got a bunch of connectors on the 31st of May in order to have the cameras up and running on the second of June. It was tight but we got it done, with great help from Sony. Our account manager Mark Harrison really hand-held the entire project – as far as driving down to the Sony factory in Pencoed to get some of the Lemos that we would need.

“We had the cameras up and running by the fourth of June, for a week of commissioning, training and tweaking. It was tight, but thankfully no hitches and everything worked. A nice project. They all seem very happy — and the camera guys love these cameras!”