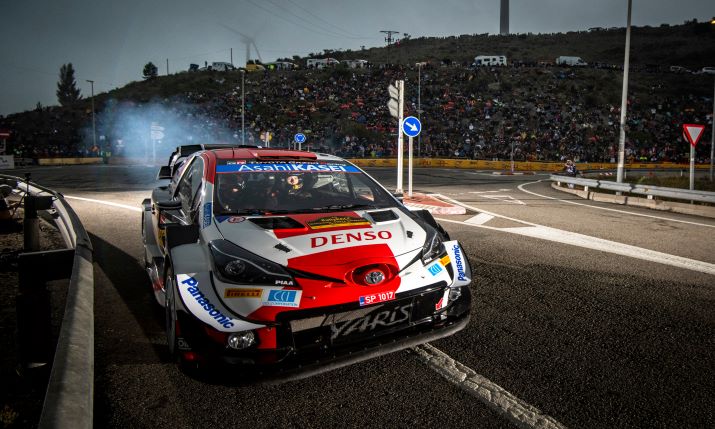 FIA World Rally Championship (WRC) is moving into a new hybrid era for the 2022 season, which is set to bring fans a new-look production and added excitement to the sport’s 50th anniversary year.

Rally Monza, taking place this weekend (19 to 21 November,) marks not only the end of the 2021 season but the end of the Championship’s 100% petrol-based vehicles.

WRC is going hybrid for the 2022 season as part of governing body FIA’s overall plan for all its motorsports. The reason WRC is going hybrid rather than purely electric like World Rallycross (World RX) is the distances involved in WRC, which make it impossible at this point in the development of electric cars to go 100% electric.

“This [hybrid era] is going to be really exciting because on the one side the cars will have a different performance and more power, but also for the drivers, they will have more power on certain parts of the stages, and to really see and make this visible for the fans are our new TV graphics, which are the essential part for this”

The competitive distances as well as the liaison distances are vast in WRC; a rally may cover around 330 kilometres competitively, plus the liaison distances to and from the service park to the stages, and stage to stage, add around another 1,000 kilometres. “All those distances on just electric, with the charging times and so on, would not be doable. So for the FIA and for the manufacturers, the plug-in hybrids, what we’re working with, is the way to go,” states Florian Ruth, WRC Promoter’s senior director for content and communication.

For the new era of WRC as the rally goes hybrid, the entire broadcast is getting a new look and feel to reflect the change, and also to give viewers new data and information that these hybrid vehicles bring to the storytelling of each race.

Speaking to SVG Europe, Ruth explains: “One of the big things we’re rolling out [for next season] is a new look and feel. We’re rolling out a new graphic package, which will change the complete design, and also the functionality as we’re moving to a new era of the WRC. We’re moving towards the hybrid era of the WRC and in the broadcast it’s very important to show this technology and to make it touchable and feasible for the audience.

Ruth continues: “This is going to be really exciting because on the one side the cars will have a different performance and more power, but also for the drivers, they will have more power on certain parts of the stages, and to really see and make this visible for the fans are our new TV graphics, which are the essential part for this. This is a completely additional way of storytelling in the new hybrid era.”

Ruth continues: “This year we have tried to prepare our broadcast system for the new hybrid era next year. We’ve launched a new, smaller, more agile line cut trucks, where we really can capture a stage, and relocate within couple of hours to another stage, and do a live broadcast. [This means] we can use a variety of trucks at different stages on a single day. 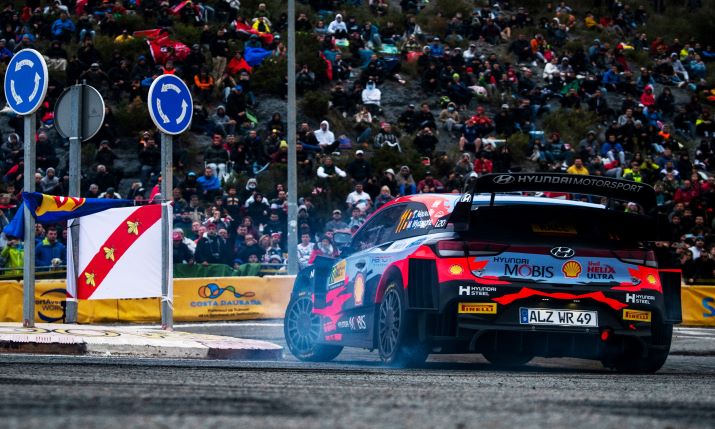 2022 will see WRC entering a new hybrid era of the sport, which will also bring in a new look and feel for the entire production

“Normally we would have the big trucks and a lot of cables to be pulled, but now we have very small trucks with a very efficient technical fibre which we can roll out in the absolute minimum time. So our cameras broadcast the stage and after the stage we pack up, go to the next stage, and broadcast live again. Our whole broadcast benefits from this system,” Ruth says.

While all the stages in a rally are broadcast, some are only on air with the over the top (OTT) platform, WRC+ All Live. Up until now, those All Live stages have not been produced up to the same quality as those intended for television, but during 2021 WRC Promoter has run trials and bought those up to the same format level.

Says Ruth, “that was a very positive test this year; we had big successes [with it] and that’s the direction we want to continue in the future”.

On new directions, upgraded onboard cameras are already adding to the viewers enjoyment of WRC, says Ruth. He comments: “We’ve just come back from Rally Spain where it could’ve been possible that Sebastian OJ claimed the title, but he didn’t, so it was really exciting and a really thrilling race.”

The Spain rally was the first this season where fans have been able to attend WRC en masse, without any restrictions. Adds Ruth: “It was so good to see packed stages again, to see the fans coming back. So after a year and a half more or less of fan absence, this is all is going in a good direction.”

Having the fans back at WRC stages makes a significant difference to the broadcast, says Ruth. In Spain, one roundabout has given viewers amazing footage thanks to the new onboard cameras developed by NEP Finland. The new cameras are called Orat II.

“Especially at Rally Spain, there are some absolutely remarkable places at the stages,” states Ruth. “There’s one roundabout with some steep hills on the side, which were completely packed with people, and the drivers had to do a donut there and obviously, at those moments, we go to the onboard camera to see the crowds out of the driver’s perspective, and you could hear them screaming! It was loud and they were cheering for every driver. And to see this perspective, not just see the car doing donuts, but also to see what the driver sees, you just see masses of people. That was one of my favourite shots of the rally, and was really, really impressive.”

The big issue up till now with the onboard cameras in cars has been the lack of accessibility of those kits, which required manual operation if they were outside the connectivity of the relay plane. When something “spectacular” happened to a car and driver away from other cameras and out of range of the plane, the crew would have to wait until the car physically arrived at a stage and then they could remove the cards from the cameras in order to replay key moments for viewers.

However, this year remote connectivity for the onboards has been added by NEP Finland, so as soon as the cars are within range, the onboards can be accessed. Every WRC driver is spoken to live on TV after every stage to get their first-hand stories on what happened to them previously. With the new easily accessible onboards, reporters are able to get fast footage of incidents to show viewers exactly what the driver saw and experienced in that moment.

Comments Ruth: “All this we can now do remotely as soon as the camera somehow comes to our connectivity, so to the footprint of the plane we can shuttle within the onboard kits, so we see the moments that happened maybe 10 or 15 minutes ago. So when a driver at a stage tells us, “I’ve had a big moment at the beginning of the stage”, but we were focusing on different cars more towards the end of the stage, we just can shuttle to his onboard kit and really show the fans right away those moments that happened. So we are now way better on the storytelling, way more on point. We don’t miss any essential stories anymore.”

While it is all about finding those unique spots and perspectives at rallies to keep fans entertained, it is also about giving them the historic views as well, Ruth explains: “At the more traditional rallies we have the more traditional stages, and people have been going there for decades already; when they’ve been there once they always want to come back, and more and more people come to those places, because everyone wants to see those remarkable, well known stages, once. We always try to include those historic places of the championship as well.” 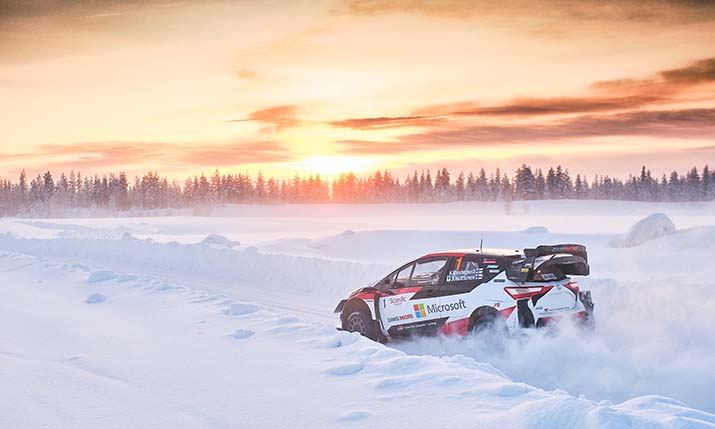 Rally Finland this year bought stunning pictures to viewers almost from the Arctic, in Rovaniemi in the absolute north of the country

Adding to the drama for 2022 on the track is one design feature of the new hybrid cars, which moves them from the existing paddle shift gears to manual stick shift. Ruth says that this is set to be very disruptive for the current driver hierarchy, as some that excel right now are finding the new gear shift system difficult, while others are finding it much easier.

Says Ruth: “It comes more back to the ability of the driver. The hybrid cars will be harder to drive than the current cars, so the driver needs to work more. It’s a bigger challenge for the driver than the current cars. We will see a lot of excitement because for some of the drivers, this will fit very much [into their skillset but] some of the drivers will struggle. We’ve seen in the last couple of weeks, that there’s a lot going on in the driver carousel, on which driver drives for which team, and there’s been some quite exciting announcements come through in the past couple of weeks. So with all this there’s a very bright future for the WRC, I’m absolutely sure.”

Ruth concludes: “After the very difficult season last year and after the lockdown, we were one of the lucky championships who could restart and save our season. Therefore this year we had a very good and strong season. We promised a 12-round calendar and now we close with the twelfth round for the final [this weekend]. And the championship is still open; the driver title is still up for grabs between two drivers and also the manufacturer title has not been awarded yet, so everything comes down to the last race and I mean, there’s not much more you can wish a wish for as a championship, right?

“We’ve seen some really absolutely great races and the absolute contrast in locations this year; we’ve been in the Arctic, almost at the north pole, visiting Father Christmas in Rovaniemi in the absolute north of Finland, and we went to the equator in the safari rally in Kenya. So two events which really brought a lot of excitement and new pictures to the championship. I’m looking forward to a lot more in 2022.”