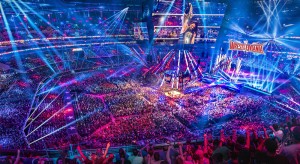 Blackmagic Design has announced that World Wrestling Entertainment (WWE) relies on Fairlight DAWs with Xynergi controllers for all of its audio post production needs, including audio post production on the recent Smackdown Holiday Tour. The WWE’s VP of Post Production, Chris Argento, and his team have used Fairlight to help deliver tens of thousands of broadcast, online and social media projects across the WWE’s numerous properties.

WWE is an integrated media organization that delivers original content 52 weeks a year. WWE programming reaches more than 650 million homes worldwide in 25 languages. WWE Network, the first-ever 24/7 over-the-top premium network that includes all of WWE’s live specials including WrestleMania and SummerSlam, as well as scheduled programming and a massive video-on-demand library, is currently available in more than 180 countries.

“We’ve been using Fairlight at WWE since 1997. We’ve never lost a session and we are still able to open projects from 19 years ago in just a few clicks. That’s something you just don’t see from any other manufacturer,” said Argento. “This level of reliability is key for us as WWE never has an ‘off season.’ The content is all storyline-based, and the story continues 52 weeks a year on all WWE platforms.”

“As we are telling different stories, we are showing histories of conflict between wrestlers or background on a wrestler. We might have to pull something from last week, last month or last year, and Fairlight makes that a seamless process,” explained Argento. “Not only do I know the clips are there, but I can access them in just a few clicks. We also rely on this efficiency because our deadlines are short, and we need to deliver fast.”

While Argento and his team may have a few days for a deliverable, the majority of the content is needed as soon as possible. “Sometimes we have days before a deadline, or we are mixing a two minute package and feeding it to the truck over satellite five minutes before a show,” he noted. “The content will usually change too, so even if we complete it days ahead of time, we will make changes just before it airs. We are used to rapid adjustments and constant change, and we depend on Fairlight’s reliability and efficiency to support our workflow.”

As the shows are taped in various arenas around the country or transmitted live, the video content is ingested into WWE’s library. As the producers cut packages and create shows from the raw materials, Chris receives AAF files and flattened MXF-wrapped video files for sound designing, editing music and mixing.

Chris and his team often make use of Fairlight’s library file feature, which allows them to import multiple edits from another timeline across multiple tracks and clips in an instant, just by opening the project in the library. He explained, “When you sound design 30 seconds of something and that 30 seconds shows up as part of another show, it’s not a matter of getting a mix of that 30 seconds, but you get that entire chunk of work in no time at all. Just open the library file, grab the portions you want and import them. You get all edits, all EQ, all level and more across multiple clips, essentially duplicating small portions of other projects, which is a huge time saver.

“Fairlight’s audio base is the greatest thing ever. You can find and spot sound effects in its library faster than you can with any other program,” noted Chris. “We use a bunch of sampling to make crazy wrestling sounds, for example a person getting thrown through a wall, which we store in the library. As our shows are made, we are collecting bits and pieces of sound and put them right into the audio base so they are searchable and available in the library in all the audio rooms.”

He added: “I’m able to play the AAF and flattened MXF-wrapped video files off of any server in the building with PYXIS. As changes keep coming in, I can layer the different versions of the video tracks, comparing them to see where things have moved. I can then make accommodations or alterations to match the audio to the newer more polished video. I mix to stems, combine them into the full mix and send back to the server to remarry with the video.”

According to Chris, the way Fairlight handles video is revolutionary. “The level of synchronicity between the video and audio, having control of the picture and it being so locked to the sound is astounding. In the middle of auditioning a sound effect, I can park on a frame and spot the sound effect to a sync point in the frame on the fly,” he said.

“I can also pull in almost any type of video from any server in the building and play it in real time, continuously updating it while keeping all versions of the video stacked on my timeline,” added Chris. “I can even pull off rough video edits right on the timeline, cutting audio and video together, and resume my session without worrying that the audio won’t match the picture later. I can’t overemphasize the importance of video because audio post is a process for video.”

With so many international deliverables, Fairlight’s ADR mode allows Chris and his team to bring the video files in with audio and make new mixes on the fly. “Much of the international work that’s not live is done in post. We record the announcers’ clean microphones, remix them in foreign languages and create voiceovers all in one shot in real time. It’s not necessarily what the ADR mode was designed to do, but it speaks to Fairlight’s flexibility and has become a mainstay for our international department,” he said.

Chris concluded: “I built the audio post department from a single room to six suites with a full staff, and we have relied on Fairlight every step of the way. From four to five hours of programming a week to now hundreds of hours a week across multiple delivery platforms. The transformation has been amazing.”