XD Motion’s latest cabled camera system, the X fly 3D, was recently used at the Stade de France for the 10-9 Six Nations victory for France over Ireland and the system is expected to be used at another Six Nations match on 19 March, according to Solène Zavagno, head of production for XD Motion. It was coupled with a Sony P1 camera and a wide angle lens. 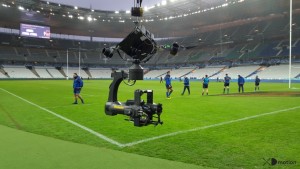 “We already used the system on at the Wuhan Tennis Open in China, a feature film, and in the future it will also be used on soccer, swimming, tennis, and more,” says Zavagno.

X fly 3D improves on previous versions by being capable of flying over a 360x350x60-metre space.

“The director enjoyed the pictures very much and used the system a lot in live shots and replays,” adds Zavagno. “The stadium safety manager was also very happy about the size of the motors which are very light and compact.”

The gyro-stabilized 3-axis head can also handle any 4K cameras and the fibre system and stability of the system even makes it suitable for 8K needs.

“The speed of the rig can reach 43 kilometers per hour and the stability of the head gives it a far longer zoom range,” says Zavagno. “And pre-position and pre-recorded movements can help to have smooth and precise camera travelling. In addition, reality augmented and 360-degree VR are also available as options.”

The ability to pre-programme movements means that the operator can focus on the camera shot without needing to also look at where the camera is over the playing surface. In addition, double roped fiber winches that weigh only 150 kilograms not only doubles the safety of the system but makes it easy to install in places that cannot support a heavy load.

Other available systems include the X fly 1D for side-to-side travel at upwards of 100 kmh and the X fly 2D that is designed for applications with an elevation change. It can travel over 700 meters and reach speeds of 60 kmh. All of the systems are compatible indoor or outdoor venues with mini or larger dolly adaptation.