XD Motion, a company that specialises in speciality cameras in non-standard use environments, has adapted its X Fly 3D rig so that it is augmented reality (AR) capable. The AR system will first be used commercially at a European eSport competition this coming April. 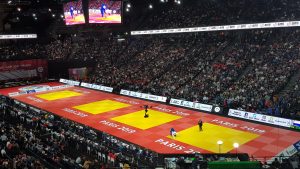 The new AR system was first tested at the Paris Grand Slam 2019 international judo tournament in Paris last January. Using the Unreal Engine for virtual graphics, the rig was proven to be compatible with other systems also using Unreal including Vizrt and Zero Density.

Speaking to SVG Europe, Benoit Dentan, CEO at XD Motion, commented: “We are not using any other tracking system; we’re providing the metadata for AR directly from our own system. Because of the stability of our system and the quality of our metadata, we have a very good quality of stabilisation even when on full zoom.”

The company will be showcasing another innovation at SVG Europe’s Football Summit 2019 this week at the Stade de France. Its 4K tethered drone includes full power and fibre optics. The drone is equipped with a full broadcast HD and 4K camera with zoom with HD lens control. Used for beauty shots, footage can be transmitted live for hours, or even days. The use of a two-member crew allows for a fast installation that can easily be moved to different venue locations.

Currently under development, the drone will shortly be AR-compatible as well. The AR capability is set to be used at a major sporting event this coming June.

Commented Dentan: “No one else is able to broadcast on a tethered drone with 4K; no one else does it.” The drone will be used commercially for the first time at a major sporting event this June. 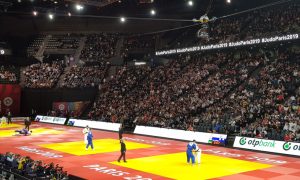 Since 2016 the company has covered all Six Nations matches at the stadium, and, in keeping with the rules of the French rugby federation, Fédération Française de Rugby (FFR), it flies at 30 metres above the ground, as opposed to the 20 metres to 25 metres required in many other countries.

Explained Dentan: “The FFR wants more clearance so the ball doesn’t hit the ropes [that the rig flies across the pitch upon].

We use double ropes rather than one, for redundancy; this gives us safety and stability and the possibility to fly higher.”

Using the latest technology, the X Fly 3D is based on four fibre rope attachment points that allow the dolly to move left and right, up and down, and forwards and backwards. Safety-critical software ensures collision avoidance as well as repeatable flight paths, so the pilot can concentrate on the camera shots without having to look at the dolly camera.

Following the Commonwealth Games, the rig was used at the Asian Games. XD Motion worked with live content company, FiveCurrents, to produce footage of the opening ceremony.