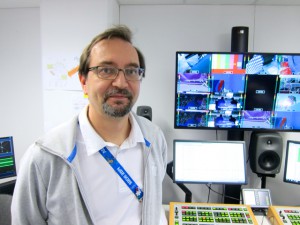 YLE Sound Supervisor Samuli Likanen oversees a large number of commentary circuits as YLE broadcasts in both Finnish and Swedish.

YLE Finland is once again on hand at the IBC but the heavy lifting for the final on-air product seen via two live channels is being done out of the broadcaster’s U10 OB unit parked in Helsinki outside of its main facility.

“It’s economics but also because we didn’t get enough space to have a proper control room here in Sochi,” says Kaj Flood, YLE, senior technical advisor. “But having the crew back home we also don’t have the spend as much.”

YLE also has three studio floors in Helsinki that houses commentary booths and an EVS ingest area. The general workflow involves receiving the OBS Multichannel Distribution Service (MDS) in Helsinki via satellite and then marrying those images up with commentary that is sent to Finland from the IBC. Mixed zone coverage and edited features also originate out of Sochi.

“We have 11 ENG crews and two Avid editing systems here in the IBC and also one Avid in the mountains,” adds Flood. Total staff working on the games is about 80 in Sochi and then 80 back home in Finland.

“We end up with 13 active video lines from here to the OB truck where the two channels are produced in both Finnish and Swedish,” says Flood.

Automation also plays a big part in the operations given that there is so much commentary returning to Finland as events are called in both Finnish and Swedish. Additional Lawo kit was brought in and the router patch panel within the OB unit is said to be as full as it has ever been.

YLE is also taking advantage of one of the new services offered by Olympic Broadcasting Services (OBS) at this year’s games is the Olympic Video Player, a white label app offering that makes it easy for rights holders to create an experience for Apple and Android-based phones and tablets. 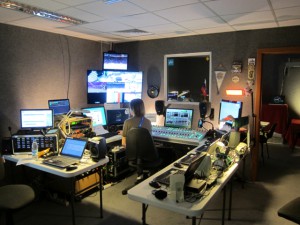 YLE’s control room in the IBC is connected to an OB truck in Helsinki where two broadcast channels of Olympic programming are produced.

The broadcaster is offering two versions of OVP; one in Finnish and one in Swedish.

“It’s a great experience and there are smart phones and tablets all over Finland,” says Flood. “And in the first week the app was downloaded more than 300,000 times and had 28 million opens. And [on Monday] total viewing was 1.3 million hours.”

YLE Sound Supervisor Samuli Liikanen adds that this week the schools are closed in the southern part of the country meaning that people are outside and primed to take advantage of the mobile app. And even students in class are rumored to be checking in on the Olympics between class, giving a new technology spin to the old days of sneaking a transistor radio into class.

“It has live transmission of events, clips, or they can watch our two TV channels,” says Flood. “It’s a complete package and if people want to see skiing from beginning to end it’s a very god thing.”