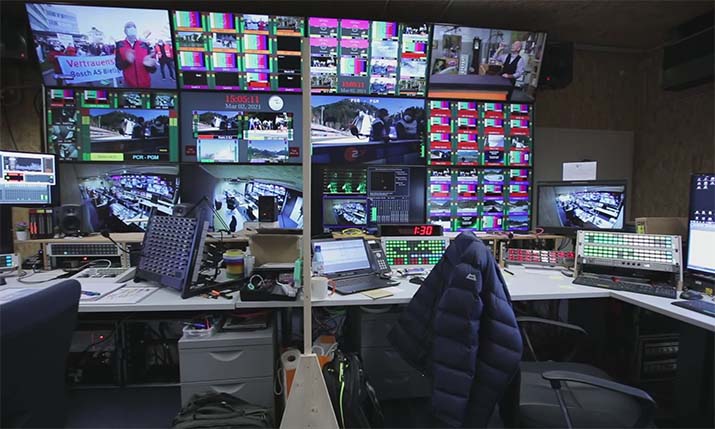 Inside ZDF and ARD’s National Broadcast Centre, in Mainz, Germany, where they are producing coverage of the Tokyo Olympics

German broadcaster ZDF is bringing the excitement of the 2020 Tokyo Olympics to viewers in Germany, using its new centralised production facility, the National Broadcast Centre (NBC), based at its headquarters in Mainz.

ZDF and ARD are producing 17 hours of live programming per day on its main feed, plus 10 online streams that are being shown on the ARD and ZDF Mediathek over the top (OTT) platform, making this the biggest production so far in ZDF’s history.

Gunnar Darge, ZDF co-head of engineering, tells SVG Europe: “It is the biggest [production we have done] because of the 10 online [streams]. In former times we would have six [streams], but not as much as now.”

The aim is to bring as much of the drama of the Olympics to viewers at home as possible, states Florian Rathgeber, co-head of engineering at ZDF. “Our editors have the aim to bring all sports in the fastest and purest ways to the audience. That’s why they have these 10 parallel online streams to bring everybody to sport events as directly as possible, without delay. For the main programme you have to make a decision on what to highlight and what to re-live, but with the 10 online streams, you’re in the position to deliver as much as you can to the audience.” 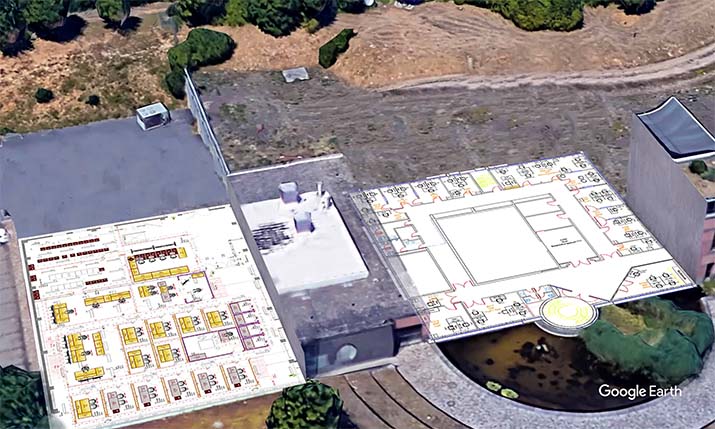 ZDF and ARD’s National Broadcast Centre for the Olympics is set over two floors, with the left hand side designed like an IBC, and the right designated for editorial 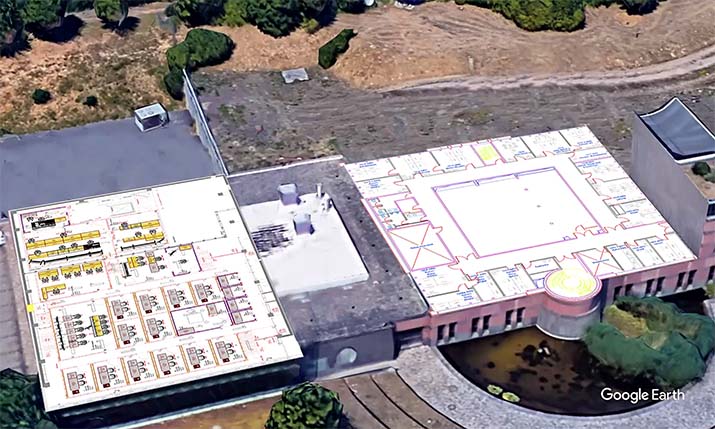 The NBC from which all this content is being delivered is receiving all feeds from the broadcaster’s operations at the Tokyo IBC. It was created by ZDF with ARD in order to cover the 2020 Euros as well as the Olympics.

“Everybody knows how you have to work here and now it’s working, but at the very beginning, it was a nightmare! There were so many people and nobody knew what exactly to do – where to get signals or recorded files from – lots of questions! “

The reason ZDF fortuitously decided to start the build of its NBC in 2019 was because it realised that with just 12 days between the end of Euro 2020 and the start of the Olympics, it would have under two weeks to ship its equipment and crew from the IBC in Amsterdam to the IBC in Tokyo. Now with the added complication of the pandemic, ZDF and ARD are lucky they made this plan two years ago.

Rathgeber tells SVG Europe: “It was at a very early point of planning that it was clear that were not going to be able to ship everything from Amsterdam – the whole production – to Tokyo for the second whole production; 12 days wouldn’t be enough. It wouldn’t be possible. We’ve done [something similar] in the past – in 2016 we shipped everything from Paris to Rio in three and a half weeks – but that was three and a half weeks, and also now we’ve got COVID as well.”

The temporary NBC is located opposite ZDF’s HQ in an extensive building. While half the office-based area reserved for editorial, a former TV-studio was converted into a chipboard-constructed classic IBC copy over two floors containing 22 editing suites, four production control rooms, and a master control room. The build finished in March 2020, just before Germany hit its first lockdown. 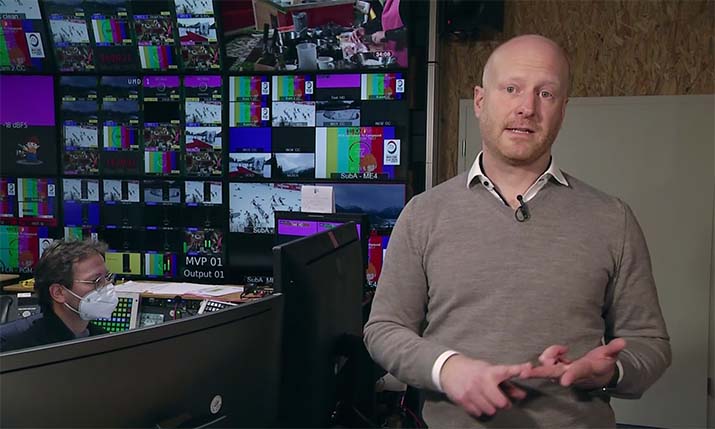 Florian Rathgeber, co-head of engineering at ZDF, inside the NBC in Mainz

Next, the race was on to get the NBC fully equipped prior to its pre-Euro 2020 test event, the FIS Alpine World Ski Championships 2021, which was held from 8 to 21 February in Cortina d’Ampezzo, Italy. In December last year ZDF began furnishing the NBC with equipment from its recently upgraded technical subsidiary shared by both ZDF and ARD, Mobile Produktions Einheit (MPE), which translates to Mobile Production Unit. The equipment in the master control room and one big Sony vision mixer is owned by the broadcasters via MPE, and all the other equipment is rented for these two major events, including monitors, Riedel panels, and EVS systems.

“I think technology is two steps ahead of the editorial plans and workflows; we can do more [technically today] than the editors can actually anticipate. But it is essential for us to have centralised production, either back home or on site.”

Adds Rathgeber: “To give you an idea of the capacity of our own equipment, we could run an athletics world championship or swimming world championship without rental equipment, but when it comes to Euro Championship football or the Olympics, we need to hire a lot of equipment because of the size [of those events]. For example, the Athletics World Championships in Doha back in 2019, [gave us] about 15 video signals that we had to receive from the host broadcaster; when it comes to the Olympics now in Tokyo, it’s more than 100 feeds you’re receiving. So the scale is bigger.”

ZDF is using a hybrid set up at the NBC. It receives all signals using NetInsight Nimbra technology for long distance media networking. It is using an Evertz baseband router, as well as an IP router controlled by Nevion iPath, which is being used for multi-viewer and online streams.

Notes Rathgeber: “It’s a kind of hybrid set up where all the main signals – the programme feeds – are run by the old baseband infrastructure for security reasons, and the multi-viewers and online streams are a good opportunity to experiment a bit with this new IP infrastructure.”

For connecting venues and the TV studio in Japan, ARD and ZDF are using Lawo power core technology. Comments Rathgeber: “Via local audio breakout it is possible to have self-monitoring for talent and reporters on site, without audio delay.” 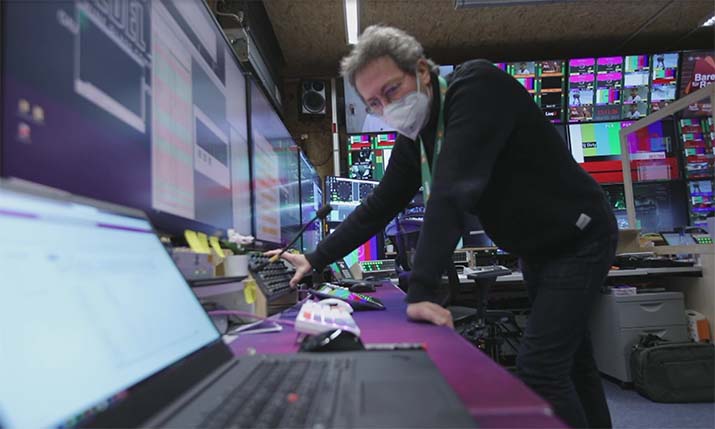 On the challenges of working with the majority of crew in Germany and the rest in Tokyo, Darge says: “The challenge is to get the good workflow to do that. This is the biggest challenge we had at the very beginning. Now everything is fine. Everybody knows how you have to work here and now it’s working, but at the very beginning, it was a nightmare! There were so many people and nobody knew what exactly to do – where to get signals or recorded files from – lots of questions! That was the problem.”

Adds Rathgeber: “The thing is [with this set up] you have almost unlimited possibilities and opportunities, because just to give an example, there are so many ways to get your feed. This was a bit overwhelming for the editorial staff [in the beginning] because they arrived two days before the Olympics and said, “all right, let’s start with the Olympics and let’s do it as we’ve always done it before,” but it’s now completely different [to how we did it in previous years]. When you do it remotely, communication is key, and defining new workflows is key, and that took time. That’s why the first days were really challenging; until everybody understood what we are doing there.”

Darge notes that while the technology being used by ZDF this year is versatile, it is not the same as being on the ground at the Olympics. He says: “The technology allows us to do nearly everything, but I must say, honestly, it’s better working onsite. You don’t have any of the big [Olympic] feeling here.”

Rathgeber adds: “I think technology is two steps ahead of the editorial plans and workflows; we can do more [technically today] than the editors can actually anticipate. But it is essential for us to have centralised production, either back home or on site. It has to be a centralised production because splitting parts, for example, having a huge editing complex in Germany and an editing complex in Tokyo, would cause a lot of double structure where you’d need double server capacity, where you need all the staff such as the experts, twice.

“Through COVID we were forced to bring everything back to Germany and we could reduce all this double infrastructure during our re-planning in 2020, and now it’s centralised in Germany, whether you like it or not. So [outside of Germany] we only have satellite venues with no double infrastructure, and this is key for the future [on events of this size]. Either you do everything at home, or you do everything on site,” he concludes.