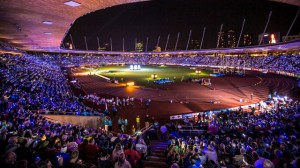 Pan-European channel Eurosport plans to show the majority of the championships live across its 59 territories. Outside Europe, the event is being broadcast by Eurosport Asia.

European Athletics president Hansjörg Wirz said, “To have more than 1,000 hours of intended live coverage of the Zurich 2014 European Athletics Championships shows that the sport of athletics remains an attractive product for television audiences in Europe.

“We are very pleased that in cooperation with the EBU we are able to showcase the best of European Athletics with them providing the biggest platform to promote our sport on public free-to-air TV channels throughout the continent.”

The entire event will also be streamed live with English-language commentary at www.european-athletics.org, with nine additional feeds available at https://eurovision.digotel.com/ea/index.html. This service will not be available in France and Germany. The live streaming platform is produced in partnership with European Athletics International Partner SPAR and EBU-Eurovision.

At a stadium that was redeveloped primarily for athletics but staged matches in football’s European Championships in 2008, the track is one of the most sophisticated in the world. It has been raised by eight millimetres to 22 millimetres, giving athletes the best possible opportunity of running faster than ever.