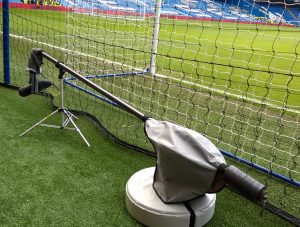 Camera Corps will promote the latest additions to its range of speciality camera systems and services on the company’s IBC 2018 stand (11.A31). Representatives attending will include Phil Beckett, Barry Parker, Neil Ashworth and Andy Sanders.

The Qx is a compact head with integral pan/tilt/zoom/focus drives. Delivering high video quality, it offers producers the freedom to cut and mix with video feeds from full-size studio and outside-broadcast cameras. Black-finished and just 125 mm in diameter, the Qx is unobtrusive enough to be operated within view of other cameras both for studio productions and in OB coverage of live events. It can also be used as part of a commentator camera setup.

The Qx incorporates a fully motorised drive giving smooth on-air control of pan, tilt, zoom and focus. Up to 96 Qx heads can be operated from a single joystick panel. The high precision motor system enables remote operators to match the precise acceleration and deceleration of much larger robotic heads when tracking moving performers on-air. Turning speed is adjustable from 4 seconds to an ultra-slow 90 minutes per 360 degree cycle with no restriction on the number of horizontal rotations.

Fully compatible with all existing Camera Corps control systems, the Qx can be rigged with just a single cable carrying power, control signals, video and audio. Control can be performed live or pre-programmed by the operator. Combining the Qx with Camera Corps’ optical fibre transportation devices such as the SMPTE 4K MAX allows secure operation over distances of up to 8 km.

Debuting at IBC, the Qx Mini Zoom is a fixed-head variant of the Qx. Housed in a compact metal casing, it gives producers the ability to track from wide to narrow angle along a predetermined line of view in applications where pan and tilt functions are not required. All other parameters are essentially identical to the Qx.

Available for rental, the new DMR (Dual Mini Remote) Head is a fully remote controlled camera mount with a wide range of applications. Primarily devised to carry a high motion camera for behind-the-goal football replays, the DMR is equally suitable across other genres such entertainment, corporate or religious broadcast programming where more than one movement and flowing live camera shots might be required.

The challenge for Camera Corps’ in-house design team was to build a system allowing live control of fluid sweeping sequences and which could be used in practically any location. Pan and tilt are performed with ultra-smooth precision, including gradual acceleration and deceleration. Remote zoom and focus control are also available for cameras supporting that function.

Based on a dual drive configuration, the DMR allows motorised control of the lateral (and optionally the vertical) angle of a counter-balanced carbon-fibre support arm. The arm itself can be up to 3 metres in length. An additional fully independent drive governs the camera pan and tilt angles.

The DMR is fully compatible with Camera Corps’ remote control panels as well as long-range connecting equipment such as the SMPTE 4K MAX. It is quick and easy to set up and also provides the freedom to make wide-ranging adjustments in camera position after the initial install. If the need arises, the DMR can also be used for circular sweep-style tracking shots as the arm can be rotated around the base axis. The entire system has a low-visibility profile to avoid intruding into the view of other cameras.

The Camera Corps DMR Head is fully weatherproof, removing the need for a camera operator to be exposed to all weather. It is compatible with HD/4K minicams, including high frame rate models.

Also making its debut at IBC, SMPTE 4K MAX is designed for use in 4K-UHD or multi-camera HD broadcast coverage of live events. It is a compact remote fibre signal transportation system with five 3G feeds to support 4K and super-slow-motion applications operated and powered over long distances.

SMPTE 4K MAX delivers the security and reliability demanded for high profile sports events where space is at a premium and an efficient fibre solution is required. It has already been used with outstanding success at one of the largest events in the winter 2018 sports calendar. Each system comprises two units: base and remote. Both are compact and highly robust, allowing very fast installation, configuration and tear-down. They connect via a single SMPTE 311M hybrid cable capable of carrying multichannel video and audio from one or more cameras back to a production control room. The same cable can be used to deliver AC mains power (240 volts at up to 480 watts) from base to remote. Two XLR4 sockets, delivering up to a combined total of 50 watts at 12 volts, are also available at the remote end.