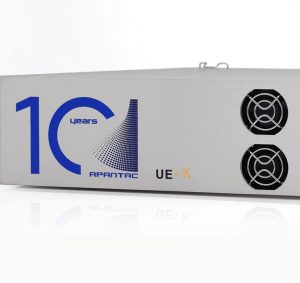 Apantac is growing its extensive range of multiviewers further with HDMI 2.0 supported products.

At IBC 2018, stand 8.E37, Apantac will showcase and demonstrate its new TAHOMA UE Series of Multiviewers. The UE is an HDMI 2.0 Multiviewer for 4K/UHD visual monitoring environments.

This new series accepts four (model: UE-4) or eight (model: UE-8) HDMI 2.0 inputs and HDMI 2.0, 12G SDI and down-converted 1080p SDI outputs. The UE series supports multiple VESA and CEA input resolutions up to 3840x2160p 60Hz (UHD) and 4096x2160p 60Hz (4K) and various output resolutions up to UHD/4K. The architecture is based on a 4×1 cascadable multiviewer, which allows facilities to increase the number of inputs to be monitored on a single display. The UE-8 is built with two UE-4 units in the same chassis and more units can be cascaded externally for greater input support. For example: the eight-input version (model: UE-8) can be configured to work as an 8×1 or as two independent 4×1 Multiviewers.

One of the unique features of the TAHOMA UE is the optional KVM function (models: UE-4-K / UE-8-K). With  these models, multiple computers connected to them can be controlled via a single mouse and keyboard. Users gain control of a given computer by simply moving the mouse over the corresponding window on the multiviewer output.