Barnfind Technologies has revealed plans to show a frame at IBC that incorporates future-proof technology to support all emerging signal formats, including 4K and IP, and adds a long-distance component to its multi-functional, signal neutral fibre transport platform. The new BTF1-41 features an extensive network of functions and the capability to transport any signal format, making it the ideal solution for a vast variety of applications including sports, telemedicine, and government projects. It will be demonstrated in Hall 8, Stand 8-A41 at IBC 2018 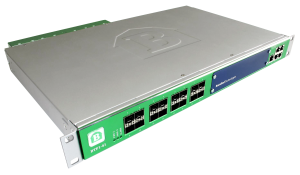 The BTF1-41 will be shown alongside enhanced versions of Barnfind’s core BarnOne and BarnMini families that now offer more control options, advanced functionality, and improved configuration capabilities. The improvements reflect the Company’s commitment to green practices by packing numerous functions into one rack unit and keeping power consumption as low as possible.

“Barnfind has always been focused on short-haul applications until now,” says Arild Skjeggerud, Barnfind CTO. “Our game-changing BTF1-41, along with other products, launches us into the next phase of our development by addressing the long-distance requirements of transport of any signals.

“We are also delighted to have several different stage boxes on our stand so visitors will have the opportunity to witness real-world examples of our unique platform at work. Our team will be demonstrating how we do more with less gear, in less space, and with less capital investment, and explain how we’ve grown from a start-up in 2012, to a global company with 60 international partners that excels in fibre transport, stage box technology, signal redundancy, multiple camera control, and much, much more”, adds Wiggo Evensen, Barnfind CEO.

New for IBC
BTF1-41 – the game changer with a network of functions
Barnfind’s BTF1-41 Frame is the Company’s most advanced unit to date and the first BarnOne with multi-format 12GB capacity and built-in SDI to IP. The frame’s future-proof technology addresses emerging formats such as 4K and IP with a network of functions that supports multiviewers, signal processing, and compression in addition to the traditional functionality Barnfind is known for. An optional mid-board section with high-speed connectors allows third-party vendor technology to be integrated into the platform, guaranteeing its longevity, and functionality will be upgraded constantly, making it resistant to obsolescence. Visitors will be able to see what the platform can offer now, but also get a glimpse of what it will be capable of in the future.

The multi-range/multi-format BTF1-41 is 12G capable, includes a 36 x 36 router, a built-in GPIO, tally, UMD, and DMX control. The series has the same BarnStudio control system, and also offers the same flexible third-party control as the existing BarnOne 3G system.

IBC Highlights
BarnOne with Web Server and control via Telnet
Barnfind’s web interface provides efficient installation, configuration, and operation of one or multiple BarnOne frames. The (free) firmware update allows access to a new version of BarnStudio control software with functionalities also available via OpenGear Dashboard (ROSS Video). The frame now offers Telnet protocol in addition to SNMP for communication for enhanced responsiveness and reliability. Barnfind can be controlled by most 3rd party control software solutions. The newest integrated to Barnfind is the Ember+.

Signal Redundancy Switch
Barnfind’s latest firmware release includes significant added functionality via an integrated signal redundancy switch that can be configured for all BarnOne’s outputs. Regardless of signal format, bandwidth, optical, or electrical, each individual output can be configured with “alternative” inputs and can all run in parallel or individually. The switch supplies full control of signal presence, quality, and status, and provides a complex, advanced redundancy system. Functions can be configured and monitored in the new BarnStudio web interface.

BarnOne Stage Box Break-out panel system
Barnfind’s new Stage Box Break-out panel allows front panels to be customised based on the required connectors. A selection of eight modules will serve as connection points to one or more BarnOne or BarnMini units. All eight modules and the 2RU chassis are made of solid aluminum, with high-performance connectors. Barnfind offers connectors for BNC’s, RJ45, XLR female and male, LEMO for Camera and LEMO for CCU, LC’s among others. This solution makes installations simpler, safer, and much more flexible.

New HiLo SFP system for 36-Channel CWDM
Barnfind HiLo SFPs are designed to meet a need for higher density of signals in one single fibre. By using half of the spacing in each wavelength of the CWDM range, the HiLo SFPs can double the capacity of the traditional CWDM bi-directional transmission. This enables a total of 18 bi-directional links (resulting in 36 channels on one single fibre). The HiLo SPFs are designed to be used with a standard optical CWDM multiplexer.

Barnfind 18 x CAM-CCU on one fibre
Barnfind’s unique CAM-CCU transport solution supports up to 18 cameras on a single fibre thanks to Barnfind’s HiLo SFP system. The sophisticated and compact system eliminates the need for heavy and expensive cabling by allowing up to 18 cameras to be multiplexed into 1 single mode fibre for bi-directional traffic over long distances. An internal matrix router allows the user to switch any camera to any CCU. Other signals, such as MADI, SDI, SDTI, Ethernet, CVBS, AES, and ASI, can also be multiplexed into the same fibre. The total solution fits in only 2RU per side.